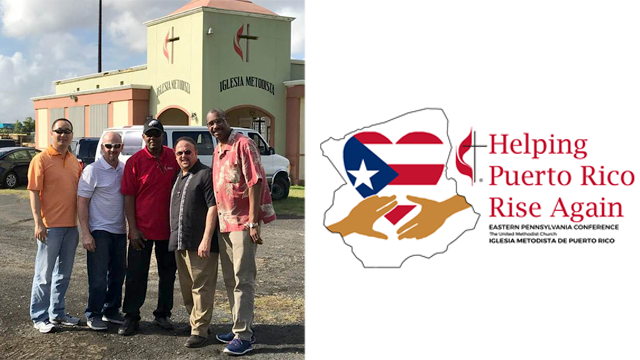 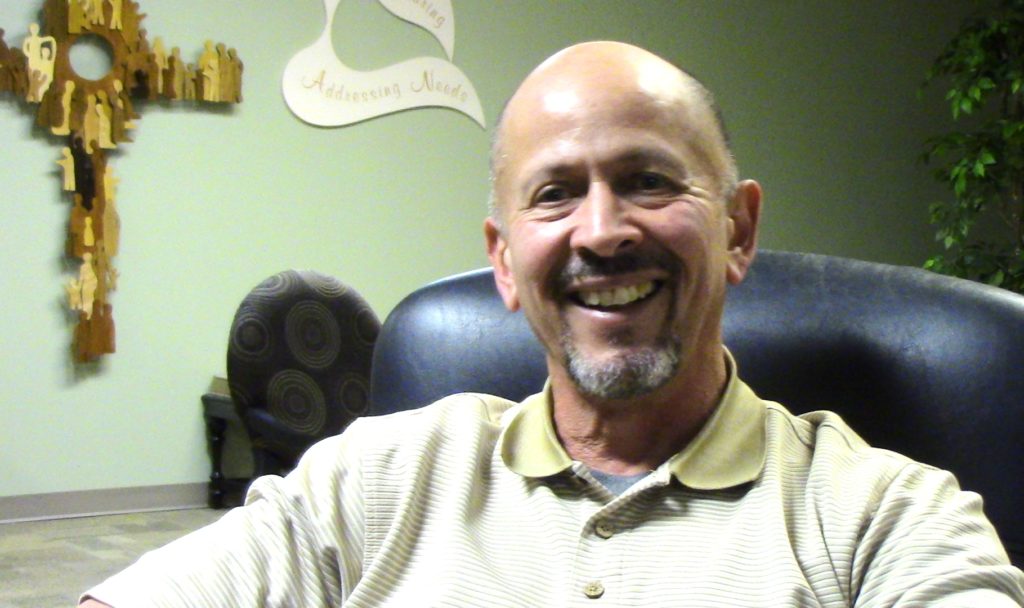 The Rev. Nicolas Camacho (right) saw and heard about extensive damage and destruction done by Hurricane Maria to many churches and homes in Puerto Rico during his brief visit to his native land in mid-February. But what he also saw, heard and felt in many tearful stories of suffering were living sermons about the saving grace and protection of a faithful God and the resilience of God’s people.

The Rev. Isabelino Rivera, pastor of a southern coastal Methodist church in Guardarraya, Patillas, showed Camacho and his visiting Eastern PA Conference colleagues, how the September 2017 hurricane’s winds severely damaged church classrooms, part of the parsonage and its garage, as well as neighbors’ homes. But he also recalled the people praying for survival, despite their fears, and then witnessing a force “like the hand of God” holding back a 40-foot wave of water that rose up but did not come ashore to take lives or devastate property. 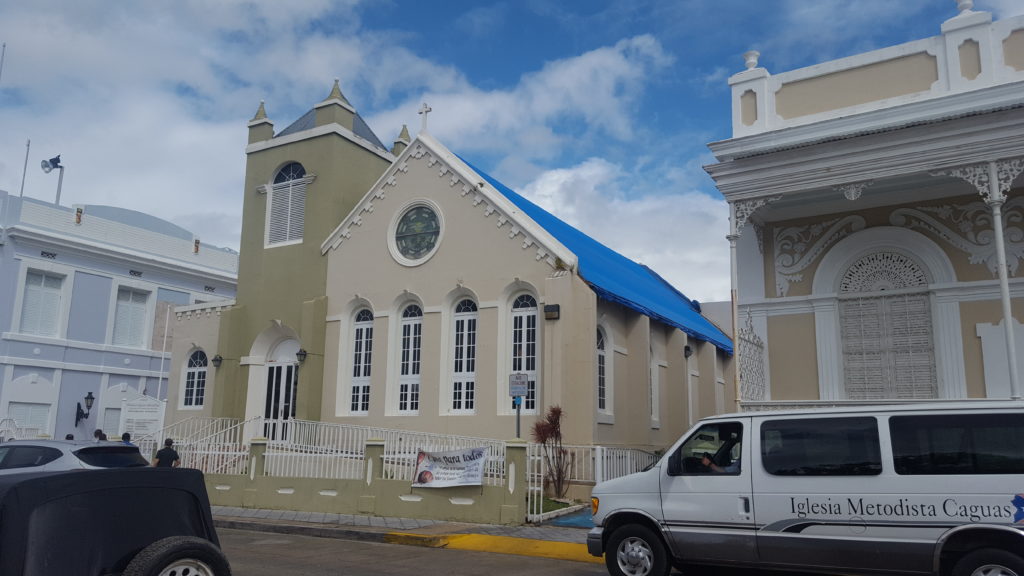 This is a church in Guayama, Puerto Rico. Rev. Nicolas Camacho Photo

While destruction and despair swept through the island in the hurricane’s wake, there were undoubtedly many such occurrences when God seemed to restrain the forces of nature. “Even with so much chaos,” said Camacho, “God was saying, ‘I am still God and I am still in control.’”

Camacho, who leads the Eastern PA Conference’s Helping Puerto Rico Rise Again campaign, was part of a six-member team from Eastern PA that arrived there Feb. 14, on Ash Wednesday and Valentine’s Day.

They began by visiting Methodist churches in San Juan, Levittown, Maunabo, Guayama, Arecibo and other communities. In addition, they met with Bishop Hector Ortiz and his staff.

The multiracial team also included the Revs. Irving Cotto, Bumkoo “BK” Chung and Tracy Bass—all district superintendents—the Rev. Herbert Coe, pastor of St. Daniel’s UMC in Chester, and Cotto’s son, Andres Cotto. They visited churches, pastors and communities across the island, seeing the damage, hearing the stories, sharing in worship and fellowship, and learning how our conference can best respond. 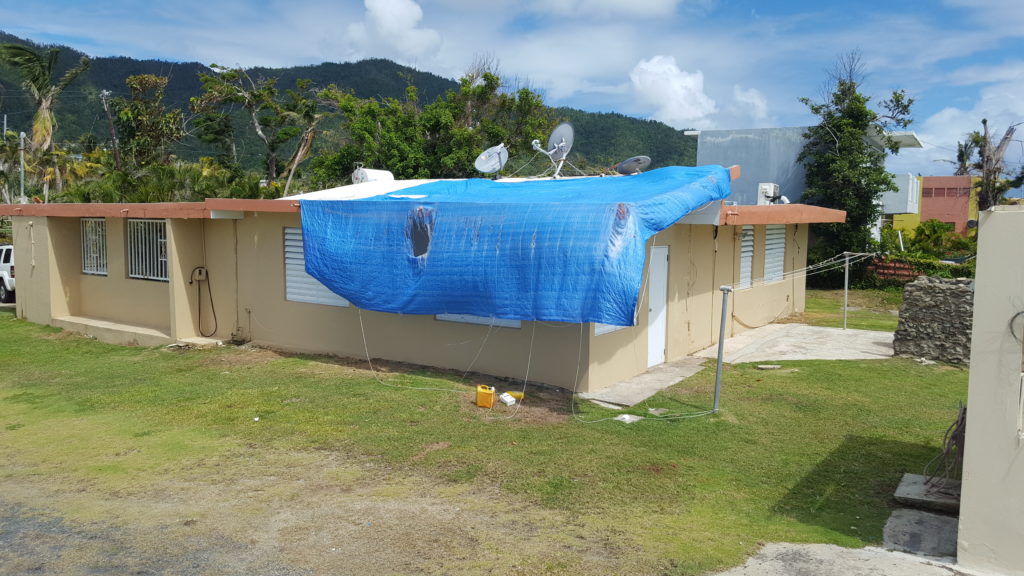 The three superintendents gave a surprised Bishop Ortiz about $33,000 in initial donated funds from our churches to support recovery efforts. They will report to the Eastern PA Conference Puerto Rico Recovery Support Task Force when it meets again March 12 and help plan and promote a more intensive campaign to raise support through more donations and Volunteers in Mission work teams. The conference is trying to raise at least $100,000 by the time Annual Conference meets in June.

Suddenly, they understood, recalled Camacho. They realized all that the severely damaged church was now doing to serve its community in ways it had not done before: serving meals, distributing food and clothing and inviting neighbors in for help in addressing other needs.

“God had taken them from the way they were doing things before to a new way of being the church—like the early church in Acts,” said Camacho. He works with public high school students in Rading and serves as a part-time community pastor at West Lawn UMC.

He spoke of how important churches in Puerto Rico are to their communities, even to neighbors who don’t attend church but rely on churches to help in times of great need. Just like some pastors and laity he visited there, he too became emotional as he shared their stories of seeing transformation begin to emerge from tragedy. 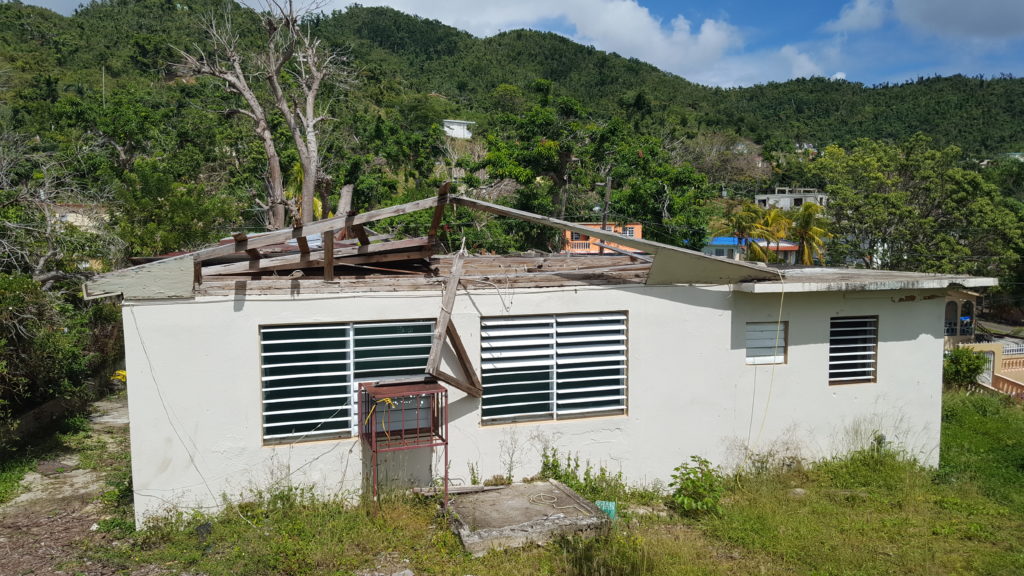 He related accounts of destroyed roofs, unusable sanctuaries, wind-tossed church pews and altars, mud-impacted floors, cracked foundations, and dangerous mold infestation from flooding, forcing many congregations to worship elsewhere. Repairs are slowly underway; but churches are not a top priority for FEMA and UMCOR funding, even though repairs to some could cost many thousands of dollars.

Much of the island still lacks electrical power and other necessities. And while it rains frequently there now, Puerto Rico’s rainy season and its next hurricane season will both begin in June, which will hinder repairs and rebuilding.

“But the great resiliency of these people can’t be described in words,” said Camacho. “We may talk and preach about hope and faith here; but the way they talk and look…. You can feel their sadness from what they went through. But they’re still being hopeful, and that’s what’s driving them.”

His team and the larger task force intend to share the hopes and dire needs of Methodists and others in Puerto Rico with the Eastern PA Conference in the months to come, encouraging members to not grow weary in their generous well-doing. “This recovery will take a long, long time and a lot of ongoing support,” said Camacho, acknowledging a difficult, but well-known truth. “They have a long way to go, and they will need our help long-term.”

In the Northwest region:

In the Southeast region:

Note: We will post the complete list of churches and other sites visited, along with more stories and photos, during the week of Feb. 25, after the rest of the team returns.