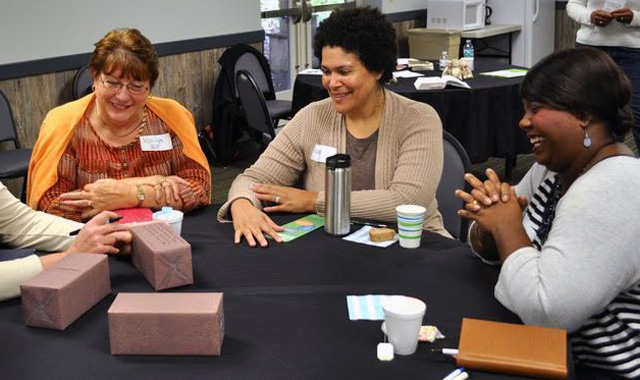 “Come, all you who are weary and heavy burdened,” Jesus Christ tenderly invites us, “and I will give you rest.”( Matthew 11:28) Ten Eastern PA Conference clergy spouses heeded a similar invitation in November 2016, when they gathered to enjoy a full-day Sabbath retreat designed just for them. Those who missed it will get another chance at the next retreat on Saturday, May 13, at Daylesford Abbey in Paoli.

The 10 participants in “Claiming Sabbath for Clergy Spouses,” offered by Artos Retreats, were diverse in age and tenure as clergy spouses, but all extolled the value of the experience, reported Julie Anderman, Executive Director. “We all wanted to be able to express ourselves authentically and safely, but with the positive intent to create connection and support,” said clergy spouse Bernie Jacabella, whose remarks captured the sentiments of several participants. “Thanks to the retreat’s design and leadership, we never stayed in a place of venting and lamenting. The Sabbath Game is an ingenuous tool to draw forth balanced and useful discussion. I was surprised!”

Artos Retreats is a nonprofit organization whose mission is to improve the wellbeing of clergy spouses. “We design our retreats to allow clergy spouses to express common issues without revealing church-specific situations,” Anderman explained. Retreat learning occurs through original visual and musical activities, case scenarios and problem-solving aided by the engaging, hands-on Sabbath board game.

Anderman, retreat team leader and a clergy spouse herself for 18 years (“with reluctance and reward!”), is thankful to Bishop Peggy Johnson, her Cabinet and the Conference Board of Pensions and Health Benefits for giving “prayerful support” in approving, promoting and subsidizing the first retreat. She presented the model to them last year and gave them a preview of the “Sabbath Game,” a key feature of the retreat experience.

Once again, partial scholarships will be available to eligible participants for the May retreat, thanks to a grant from the Pastoral Excellence Network. The retreat team, which comprises Anderman, musician and worship leader Lynnette Carter, and graphic designer Lisa Mears, may plan a third retreat for the fall. “Artos Retreats feels blessed to play a role in bringing a diverse group of clergy spouses together in such a spiritually meaningful way,” said Anderman. While retreats are designed for clergy spouses of both genders, she added, “we need to learn more about the male clergy spouse experience in order to provide them with the most meaningful workshop or retreat experience. We are asking male clergy spouses to share their insights with us during a confidential evening focus group session over dinner on (Thursday) March 16 at The Desmond Hotel in Malvern.”

NOTE: Register for the upcoming Artos events via our Planning Center Online website:

Also, look for future reports of a new, experimental pilot project, titled “Starting Strong: Healthy Pastoral Transitions,” that will offer multilateral workshops and professional coaching to improve the resilience of clergy, spouses, and churches during pastoral transitions. We will create a special webpage for this pilot project in the sponsoring Conference Pension & Health Benefits section in February.