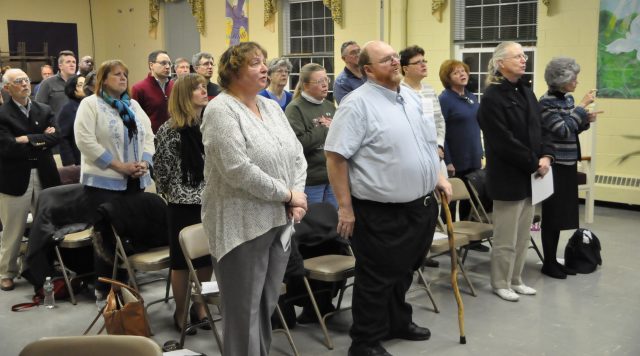 “Fill your servants with your Holy Spirit.  May they seek you for wisdom, knowledge, love, compassion and clarity as they follow your leading.”

About 40 congregants repeated that hopeful appeal to God eight times during a special Wednesday night “Concert of Prayer,” Jan. 11, at Lima UMC. Their “Litany of Prayer for Bishops, Clergy and Laity” sought wisdom and compassion that will be much needed by an exploratory body of global leaders whose forthcoming deliberations may help determine the future state of The United Methodist Church.

The 32-member Commission on a Way Forward, assembled by members of the UMC’s Council of Bishops, will examine church laws and teachings on homosexuality to determine whether to recommend changes to a special session of General Conference in 2019. The body will have its first meeting in late January.

In its Praying Our Way Forward Initiative, the Council asked each conference to take turns spending a full week in collective prayer over this endeavor, and Eastern PA was the second conference to do so. Each conference was asked to pray “for the church’s effectiveness in fulfilling our mission of making disciples and for the outcome of the work of the Commission on a Way Forward.”

While churches around the conference reported lifting the denomination in prayer during Sunday and midweek services, Bishop Peggy Johnson invited members to join her at Lima UMC for a special prayer service. The Rev. Maryanne Ditter, Minister of Spiritual Formation at Tabor UMC in Woxall, wrote two litanies and led the service, along with Music Director Rich Fetzer. Ditter had also prepared a Prayer Guide for the full week to help conference members honor the daily commitment to pray. Along with inspirational songs and prayers, including a Prayer for Unity, the quiet, 90-minute service featured ample time for worshipers to visit three stations placed around Lima’s fellowship hall for reading, reflection and prayer. Each station table held brief but profound writings by Rich and Sue Fetzer on three topics fitting for the occasion: Humility, Testimony and Honoring God (click to view and download as PDFs). Each station also offered symbols of its assigned topic to enhance reflection.

The Northwest District sponsored a simultaneous Concert of Prayer that drew about 40 more people to First UMC Schuylkill Haven. After silent meditative prayer, the service followed the ACTS prayer model, according to the Rev. Joe Tyson, District Superintendent.

First Church’s praise team led the gathering in Adoration, followed by corporate and personal Confession, a time of Thanksgiving, including Holy Communion, and then a season of Supplication that lasted until 9 PM, as people prayed for “The Way Forward,” as well as personal and intercessory needs.

Here, too, there were prayer stations where worshipers could focus on Family, Healing, the Nation, the Community, their Local Churches, and the Unity of the Body of Christ.

“There was a clear presence of the Holy Spirit here that night,” said the Rev. Christopher Fisher, senior pastor. “The Holy Communion and the time of confession were very meaningful and powerful. And some of us saw immediate results to our intercessory prayers within a short time.

“Many simply waited before the Lord in silence,” he recalled, “pouring out their hearts in groans and wrestling during the time of supplication.” The church remained open for prayer until 6 AM, the next morning, offering “a time of abiding” and an open invitation to “come when you can and leave when you must.”

Several Northeast District pastors responded when the Rev. Irving Cotto, Superintendent, asked in advance what efforts they would undertake as part of the conference-wide prayer vigil. The Rev. Kimberly Leskowich reported members of Meeds Memorial UMC would focus part of their midweek prayer meeting on the denomination’s challenge and would invite nearby Audenreid-Jeanesville UMC to join them.

Also, the Rev. Brad Leight at Grace-St. Paul’s UMC in Jim Thorpe, emphasized the Praying Our Way Forward effort in the pastoral prayer during Sunday worship and throughout the year, while opening the church sanctuary on Tuesday, Thursday and Saturday for open prayer times.