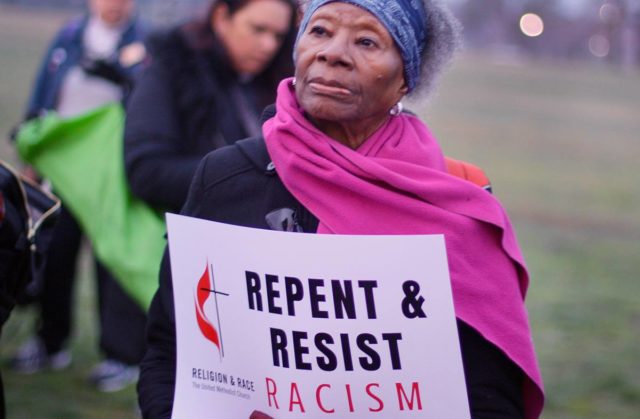 Do you accept the freedom and power God gives you to resist evil, injustice and oppression in whatever forms they present themselves? I do.

“The Renunciation of Sin” is a fundamental promise in The United Methodist Church’s covenant of baptism and membership vows.

Stoking racist fears and slandering sisters and brothers of color are indeed evil sins that we are called to resist. Are we, as a nation, not better than this? Are we, who profess to be disciples of Jesus Christ and followers of his teachings, not better than this? And should we not demand more civility and fair-minded integrity of our elected leaders—especially of one whose responsibility is to represent the cherished values of our nation on behalf of all Americans?

It is dishonest, hypocritical and repugnant to claim that four racial-ethnic women who were elected to represent their diverse constituents in Congress “hate America” and are “incapable of loving America,” merely because they criticize administration policies, priorities and actions. Such a claim is itself un-American.

Watching our highest elected official revel in hate-filled chants of “Send her back!” and then condone those chants as patriotic should chill all of us to the core. These intemperate sentiments are deplorable, and they are proving to be dangerous.

The Eastern Pennsylvania Conference Commission on Religion and Race stands in solidarity with all those who condemn our U.S. President’s racist tweets and racist policies, practices and public statements. We stand in solidarity particularly with the combined statement of protest issued last week by leaders of three of our denomination’s general agencies.

“As Christians and general secretaries of United Methodist Women , the General Board of Church and Society and the General Commission on Religion and Race , we call on United Methodists to live out our faith by speaking out against the racist ideas and language in our political discourse.”

With urgent concern for the health and wholeness of our nation, we challenge all persons, churches and communities of faith to do likewise. May we be reminded of our United Methodist Book of Resolutions statement #3371: A Charter for Racial Justice Policies in an Interdependent Global Community*:

That our strength lies in our racial and cultural diversity and that we must work toward a world in which each person’s value is respected and nurtured;

That our struggle for justice must be based on new attitudes, new understandings and new relationships and must be reflected in the laws, policies, structures, and practices of both church and state

We commit ourselves as individuals and as a community to follow Jesus Christ in word and in deed and to struggle for the rights and the self-determination of every person and group of persons.

In other words, we must speak out!

(*To learn about our definitive understanding of and position on racism, see theUMC Social Principles,para. 162A, “The Social Community: Rights of Racial and Ethnic Persons.”)