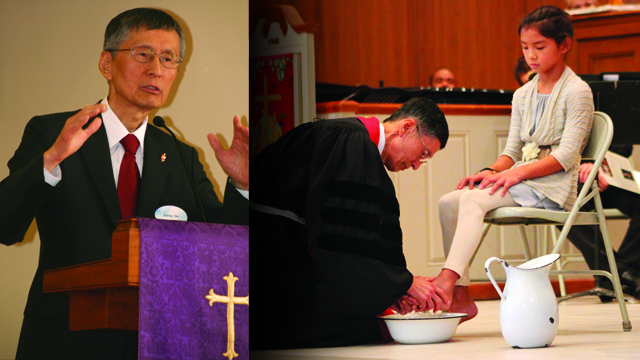 Bishop Young Jin Cho moved in 2012 from being the pastor of the largest worshiping congregation in the Virginia Conference, which has one of the largest conference memberships in The United Methodist Church, to eventually becoming bishop of that conference and the first Korean-American bishop of the Southeastern Jurisdiction.

The highly regarded, deeply spiritual episcopal leader believes in growing leaders and churches from the inside out. And that is a message he may share with clergy leaders of the Eastern PA and Peninsula-Delaware conferences during their joint Lenten Day Apart gathering on Monday, Feb. 8.

Elders, deacons and local pastors from the two sister conferences will come together at Aldersgate UMC, 2313 Concord Pike, in Wilmington, Del., invited by resident Bishop Peggy Johnson for a morning of fellowship, learning, worship and Holy Communion. Significantly, it could be their last time to come together if episcopal areas are changed at the Northeastern Jurisdictional (NEJ) Conference in July.

One plan being considered would realign Peninsula-Delaware with the Baltimore-Washington Conference. The need to realign and eventually reduce episcopal areas, due to jurisdictional membership decline, is an open question that should be decided by an inter-jurisdictional committee or the Judicial Council at General Conference in May or at the ensuing NEJ Conference.

In the meantime, clergy from these two conferences will embark on their Lenten season journeys together, remembering Jesus Christ’s 40-day journey in the wilderness, where he was tested by Satan at the intersection of his dual identities as both human and divine.

The day will begin at 8:30 AM with fellowship over coffee and tea. All clergy are asked to sign in at their respective district tables. Bishop Cho will deliver a keynote presentation on prayer at 9 AM. At 10:30 AM the clergy members will join in worship, with the bishop preaching, and then share in the Eucharist and a benediction. Bishop Cho was elected and consecrated a bishop at the Southeastern Jurisdictional Conference in 2012. He is the first Korean-American elected to the episcopacy in that jurisdiction and the first bishop there to be immediately assigned to lead his home annual conference. He will retire this year after serving one four-year term overseeing nearly 1,200 churches and about 335,000 Methodists across most of Virginia.

Born in 1946, in Onyang, South Korea, Cho graduated from Methodist Theological Seminary in Seoul, Korea and came to the United States in 1979, where he earned Master and Doctor of Divinity degrees from Wesley Theological Seminary in Washington, D.C. Ordained in the East Annual Conference of the Korean Methodist Church in 1977, he transferred into the Virginia Conference in 1983.

He was senior pastor of the Korean UMC of Greater Washington (KUMCGW) in McLean, Va., for 22 years. He led an increase in worship attendance, in a fast-growing area, from about 100 to more than 1,000 people and baptized 276 adults and youths. The church, founded during the Korean War, completed three building projects during his tenure and helped start two more Korean-American UM churches.

Cho was appointed Superintendent of the Arlington District in 2005, where he concentrated on three goals: developing new faith communities, revitalizing existing churches by transforming clergy leadership, and strengthening connectionalism. In seven years, under his leadership, the Arlington District started more than 10 new faith communities and introduced many training events for the clergy and laity to strengthen their spiritual foundations for ministry. He has always emphasized that Christ the Lord should be central to all our ministries, and prayer should come first.

Widely respected by Christians in the U.S. and Korea, Bishop Cho says his faith is inspired by the Rev. Henry Appenzeller, a Methodist missionary from what is now First UMC in Lancaster, Pa., who led the introduction of Protestant Christianity to Korea from 1885 to 1902.

The bishop says he wants to “challenge Methodist pastors and laity to understand their spirituality” and to practice spiritual disciplines daily. He contends that members need to focus on Christ’s vision for the church. “We confess that Jesus Christ is the Lord of life, the Lord of the church, the Lord of history,” he said. “We need to re-examine ourselves before God.”

“We must kneel down before God,” he explained, “humbly seeking God’s wisdom and guidance. That is where we can find the way and find hope.”

Bishop Cho and his wife, Kiok, a deacon in full connection, have two daughters, Grace and Sophia, and one son, Chris.

Learn more about Bishop Cho and view a 7-minute video about his life story and faith journey, produced for his episcopal candidacy in 2012.