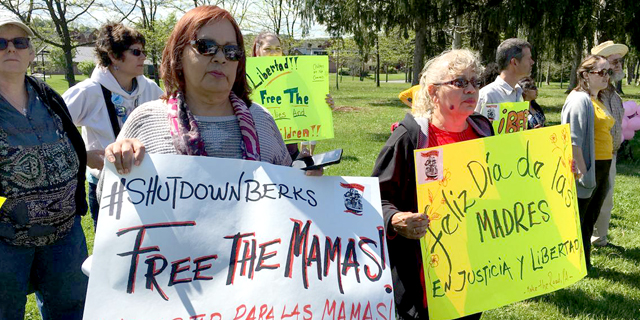 In the throes of the nation’s broken immigration system, dozens of Central American families seeking asylum from violence at home have been languishing at a detention center near Reading, Pa. for nearly a year. Frustrated by their plight, 22 of the mothers waged a two-week hunger strike in late August, which aroused concern and protests from church leaders and others. They recently suspended their strike due to threats some say they received from detention facility staff that their children may be taken from them. While waiting and trying to appeal their denied asylum claims, but fearful of returning home, the mothers and children are living in reportedly inadequate conditions at the Berks County Residential Center in Leesport, about 70 miles northwest of Philadelphia. It is one of three for-profit detention centers in the U.S. housing immigrant families as they await court dates or asylum hearings. The other two are in Texas.

There have been reports from visiting psychologists of children, who are not attending school, being depressed, having tantrums and contemplating suicide. And one guard at the Berks center recently confessed and was convicted of committing institutional sexual assault against a 19-year-old mother there. He will receive from six to 23 months in prison for his offense.

Having come to the U.S. from Honduras with her 2-year-old son, she is one of the group of mothers known as “Madres Berks.” They escaped violent gangs who have killed countless victims in Honduras, El Salvador and Guatemala. In January, the World Bank ranked El Salvador as the world’s deadliest country outside a war zone.

The women are now eating one meal a day, but they say they will resume the strike next week if they have not been released. Lawyers who visited their clients during the hunger strike said some had lost significant amounts of weight, about 10 pounds in some cases. “Their faces looked sunken and gaunt,” said attorney Carol Anne Donohoe.

U.S. Senator Bob Casey (D-PA) sent a letter last month to federal Secretary of Homeland Security Jeh Johnson about the prolonged detentions and the conditions at Berks. “The families detained there have in many cases escaped unspeakable horrors in their countries of origin and are seeking asylum and a better life,” he wrote. “We can do better than the treatment they are receiving.”

All the detention centers are due to be evaluated in November, including the Berks center. But when Johnson said last month that the average length of stay at a family detention center was 20 days, it upset the women in Berks and prompted their hunger strike.

Bishop Peggy Johnson has been looking into their plight and this week wrote an essay for her Bishop’s Blog titled “Loving the Stranger.” She reminds readers of the biblical mandate to welcome and show care to strangers—even undocumented ones—no matter how or from where they come.

Members of the surrounding community held a candlelight vigil last week, one of several protest actions waged to cast light on this dim, largely unknown situation. Jose Albarran, a Lay Missioner recently assigned to plant a new Latino faith community in Reading for the Eastern PA Conference, attended the vigil, along with his assistant, Urban Missioner Andres Torres. The two said they could see from a distance the mothers observing the rally from behind the facility’s fence and could hear them singing hymns.

Albarran, who apprenticed under the Rev. Elena Ortiz at Nuevo Nacimiento (New Birth) UMC in Lebanon, and Torres are meeting people in the community, including those who organized the gathering. According to the Rev. Esdras Seda, Conference Latino Ministries Coordinator, they are exploring ways they can get more involved.

The Rev. Paul Clark, chaplain at United Methodist-related Albright College in Reading, has “been honored” to participate in four demonstrations so far at the detention center in support of the women and their families. One, on Sept. 6, drew an interfaith gathering, including UCC, Catholic, Zen, Muslim and Mennonite clergy.

“It was a great night,” said Clark, a UCC minister. “Several of the mothers spoke from behind the fence. There is much courage and hope at these events.

“Three weeks ago,” he recalled, “I offered these words that have kept me going: ‘We have God and one another. That’s all we’ve ever had, and that’s enough. Please know that we are with you, we love you, and we will not stop until you are free.’”

There is much more to learn about this situation, especially the legal aspects of the detained families’ asylum appeal and their demands for more humane treatment. Several recommended sources are: