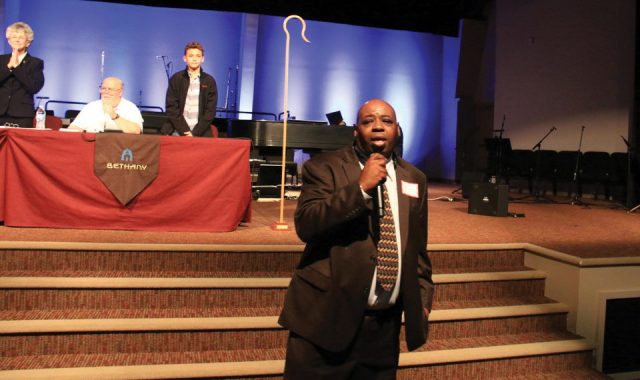 Unlike some church meetings, where leaders quickly dispense with a hymn, a prayer and a short homily to get down to business, Eastern PA Conference members gave more time and may have found more need for the prelude to their recent Adjourned Session of Annual Conference.

They began the three-hour session, Oct. 1, at Bethany UMC in Macungie by vigorously singing “Great Is Thy Faithfulness.” They prayed and then heard the Rev. Robert Johnson of Tindley Temple UMC preach passionately on the theme “You Shall Live and Not Die” from Psalm 118:17.

Both the song and sermon offered a prophetic invocation to the tense proceedings that ensued, as members debated and then accepted a proposal by the Conference Cabinet and Treasurer to reduce the conference’s districts from six to four, as of July 1, 2017. They then approved a 2017 Connectional Ministries budget, based on that mid-year redistricting, that calls for $3.2 million in church giving and over $3.1 million in conference expenses. The $92,000 balance will be used to help meet growing financial obligations, including the Pre-1982 Clergy Pension Liability.

The Rev. Rodney Shearer no doubt spoke for many when he voiced lament for the loss of two districts and district superintendents. But after months of painstaking deliberations, following April town hall meetings in each district, it was too late to change directions or further delay the inevitable. The decreases in churches and total church giving and the stubborn increases in conference liabilities had become all too clear. The enlarged districts will be renamed as the North, South, East and West districts, with more churches per district but also more staff support and compensation for the superintendents who must oversee them. Also, the leadership of mission connections will become more crucial to connecting churches across larger districts and advancing their collaborative efforts in ministry.

The conference Cabinet presented the resolution with a comprehensive financial and missional rationale offered by the Rev. Anita Powell, Cabinet Dean; Irene Dickinson, the new Chairperson of the Council on Finance and Administration (CFA); and Jim Cruickshank, Conference Treasurer. The Board of Trustees was also a co-sponsor.

While there was ample debate, including questions, pro and con speeches, and attempts to offer amendments, the resolution passed as presented by a large majority. Also, an offering was received to provide  scholarships for the conference’s mandatory Changing Racism Workshops, offered twice-yearly. And the conference officially welcomed back Bishop Peggy Johnson and her husband, the Rev. Michael Johnson, for another four years. She becomes the first Philadelphia Area bishop to be assigned to a third term since Bishop Fred Corson in the early 1960s.