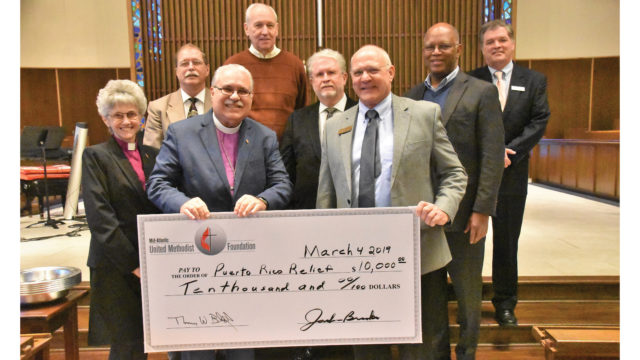 The Eastern PA Conference is living up to its 2018 campaign commitment to “Help Puerto Rico Rise Again!” Our third Volunteers in Mission (VIM) team heads there June 15 to donate collected hurricane recovery funds and skilled labor. Both are greatly needed and appreciated by the Methodist Church of Puerto Rico (MCPR).

Churches of the Eastern PA and Peninsula-Delaware conferences raised over $22,000 together so far this year, and the Mid-Atlantic UM Foundation added a $10,000 challenge grant, for a total of $32,030. Clergy of the two Philadelphia Area conferences brought many of their donations to their joint Lenten Day Apart event, held March 4 at Aldersgate UMC in Wilmington.

Bishop Hector Ortiz, leader of the MCPR, was there to thank them, report on the devastation caused by Hurricane Maria in late 2017, update them on the slow progress of recovery, and then join them for worship.

“Thanks to all who have prayed and worked so hard to raise this much-needed money. And thanks also to the Mid-Atlantic Foundation for its generous donation,” said Bishop Peggy Johnson. “We are doing the work of God and being Christ’s hands and feet in mission here we are needed most.”

The third Eastern PA Conference VIM team, led by the Rev. Nicolas Camacho, will deliver the funds to the MCPR when it arrives in Puerto Rico June 15. The donation will help restore a badly damaged home, whose owners, like many others, did not qualify for federal assistance through FEMA.

A native of Puerto Rico and an assistant pastor at West Lawn UMC in Reading, Camacho led the conference’s first VIM team to the island in November 2018 to help rehabilitate another home that suffered severe damage from the storm. He also delivered then nearly $100,000 that our conference had raised all year in its ongoing recovery aid campaign.

A second Eastern PA Conference VIM team, also composed of clergy and laity from various churches, traveled there to work from March 30 to April 6.

“We worked on two houses, repairing and replacing doors, windows and molded paneling, among other tasks” said Szoke, a carpenter and experienced VIM team leader. “We didn’t know each other; but we became closer by working together each day and sharing in conversations each night about ourselves, our personal journeys and how we came to know Christ. We learned we had a lot in common.”

While few on the team were skilled in doing building repairs, “it was probably the best mission trip I’ve been on when it comes to building camaraderie,” said Szoke.

Camacho will lead another, 12-member team there Nov. 9-16 to work on two homes in Camuy, located in the northwest. The team will include three returning members of his first team and several members from two of our conference’s Latino churches: Nuevo Creacion (New Creation) UMC in Lancaster and Espiritu Santo (Holy Spirit) UMC in Philadelphia.

Camacho is also is recruiting volunteers for more VIM teams to go in 2020 to further assist the MCPR’s extensive church and community restoration efforts. FEMA projects that full recovery may take up to 10 years.

Szoke has agreed to lead another team next March. More volunteers, especially those with building construction skills, are direly needed.

Team members pay much of the roughly $900 per-person cost for their mission trips (for airfare, food, lodging and contribution to gas). But some churches provide financial assistance. Meanwhile, the conference’s Connectional Ministries Office pays for each person’s liability insurance, about $35.

“On these trips we work hard, but we have a lot of joy and fun as well,” Camacho assures his teams, who receive lodging and hospitality at MCPR camps.

“Though Hurricane Maria was nearly two years ago, we know there is still much work to do for a full recovery,” said Bishop Johnson, who plans to join a VIM team there in early 2020. “We will continue to support our sisters and brothers in Puerto Rico.”

Note: Several Eastern PA churches have also sent mission teams and dollars to Puerto Rico but not as part of the conference’s VIM ministry. And many donors have given to help Puerto Rico directly through UMCOR.