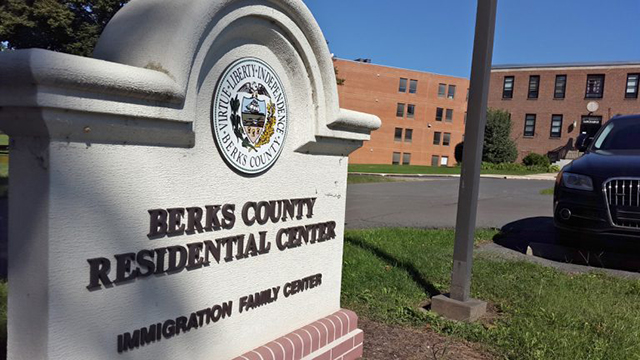 “We oppose immigration policies that separate family members from each other or that include detention of families with children.” (Social Principles, ¶162.H)

The UMC’s General Board of Church & Society announced a new advocacy campaign to persuade Pennsylvania Governor Tom Wolf to shut down the Berks Family Detention Center near Reading. Organizations, including churches, agencies, conferences and schools—but not individuals—are being asked to sign onto a letter calling on the governor to close what many see as a prison for immigrant families, including children, who seek asylum as refugees.

“This is one of multiple, urgent detention sites across the country where we need your help to call for an end to injustice and abuse,” read the Shut Down Berks Campaign appeal shared by the Rev. Jeania Ree Moore, Church and Society’s Director of Civil and Human Rights. “Please sign on and share widely with other groups.”

Bishop Peggy Johnson, who serves on Church & Society’s board, has signed the letter on behalf of the Eastern PA Conference. So have some churches. She urges churches and affiliated organizations to consider signing it also.

“All one has to do is visit this site and stand outside on a Sunday afternoon, and see these women and children standing there on the other side of a chain link fence looking forlorn and hopeless. You know there is an inhumanity here that needs to be addressed. We are better than this as a nation and as a state.”

“Jesus’ ministry was directly with persons who were on the margins to give them the life God intended. Immigrant mothers and children held in detention centers today are among the marginalized who need our actions to bring relief,” said Ruth Daugherty. “In the past, persons from EPA have held worship services at the Reading Detention Center to let the occupants know that God loves them and we are trying to bring them relief.  Churches and organizations are asked NOW to contact Governor Wolf asking him to close this facility. We can make a difference.”

“As Wesleyan people, we are reminded that John Wesley spent every bit of money he had on the ministry with those incarcerated and those forgotten,” writes the Rev. Lydia Muñoz. “Our country has a terrible habit and sin of incarcerating those we would rather forget. It is part of our white supremacist legacy.  We do it with black and brown young men; we do it with victims of domestic violence; we do it with the mentally ill; and we do it with immigrant babies and mothers.

“Our witness in demanding the shutdown of Berks Detention Center is part of our commitment to the gospel of Jesus Christ: ‘I have come to announce the year of the Lord’s favor…to proclaim liberty to the prisoners and set the captive free.’ (from Luke 4:18-19). Anything less is not scriptural holiness.”

Meanwhile, members of the team are pleased that the U.S. House of Representatives passed a bill Tuesday that could provide a pathway to citizenship for more than one million undocumented immigrants, a move that comes amid fierce debate over illegal immigration.

The American Dream and Promise Act of 2019 passed by a 237-187 vote, igniting proponents’ cheers of “Sí se puede.” (“Yes, we can.”) It provides legal protections to multiple groups of immigrants who have lived in the U.S. for decades. These groups include recipients of Deferred Action for Childhood Arrivals (DACA); those who hold Temporary Protected Status (TPS); and beneficiaries of Deferred Enforced Departure (DED).

An estimated 2.5 million immigrants could be permanently protected under the bill. And many Americans, opinion polls show, support legislation that would offer a pathway to citizenship, especially for “Dreamers”—undocumented immigrants who came to here years ago as children. Yet, despite multiple congressional attempts to pass the Dream Act since its first introduction in 2001, it has never become law.

But while Democrats secured the bill’s passage in the House, it is unlikely to become a law anytime soon, with a presidential election in the near-future and the need for approval by a Republican-controlled Senate and President Donald Trump. Trump has expressed disapproval of such initiatives to relax enforcement of immigration laws against longtime residents.

Church and Society’s Moore announced the House vote this week on the monthly conference call of the national Rapid Response Network of immigration justice advocates. Daugherty and Muñoz represent Eastern PA in that network.

Advocates recommend two websites for more information about the new bill and testimonies from those whose lives are affected: https://unitedwedream.org/dream-promise-update/ and https://dreamandpromise.com/#

Four things you can do right now end child detention

Read another, related letter from Rebecca Cole, Director of Organizing at Church and Society, on the agency’s website.

“The U.S. government is holding over 2,000 children at the Homestead Detention Center in Homestead, Florida,” she reports. “Many of these children fled violence and poverty in Central American to seek asylum in the United States, only for U.S. immigration officials to tear them from their families. They should be released to a family member or other sponsor. Instead, the children are spending weeks or months in inhumane detention.

“Apart from being harmful to children, these policies are immoral and contrary to our Gospel mandate. The United Methodist Church has spoken out against them. It says, “We oppose immigration policies that separate family members from each other or that include detention of families with children.” (Social Principles, ¶162.H)

Cole writes that she spent Memorial Day with United Methodists, people of faith, teachers, students and community groups in Homestead. “We came together to call on the U.S. Department of Health and Human Services and the Office of Refugee Resettlement to close the Homestead Detention Center and unite immigrant children with their families or sponsors,” she writes.

Church and Society, in partnership with other faith-based organizations and community groups, is working to shut down the Homestead Detention Center and end child detention. And they are asking for help from justice-loving people of all ages—adults, children and youth—in writing, signing and sending advocacy letters. Cole also asks United Methodists to Host an event during the National Week of Action, June 9-16.

“United Methodists teams, other people of faith and community partners will be hosting and attending End Child Detention events across the country June 9-16,” writes Cole. “Coordinate a vigil. Attend a march. Schedule a meeting with your member of Congress’s office. Raise awareness and generate support for ending child detention. Thank you for your support for immigrant rights and for working to end child detention.” Learn more…