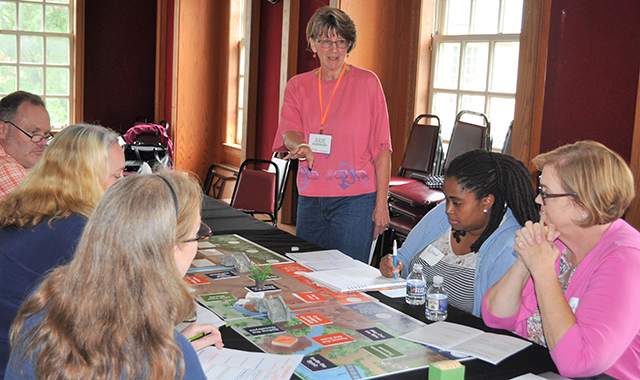 Three years ago, the Eastern PA Conference Board of Pension and Health Benefits took a chance. They agreed to partner on an outside grant funding project with Artos Retreats, a tiny new organization dedicated to improving the well-being of clergy spouses. That first step of faith has led to sponsoring multiple programs and coaching for clergy spouses in our conference.

“For years, we had searched for effective ways to address the needs of clergy spouses and families,” explains Jo Fielding, Executive Director, Eastern PA Conference Board of Pension and Health Benefits. “Many of our board members are clergy; so they fully appreciate how clergy spouse well-being contributes to clergy health and ultimately to congregational vitality. We are pleased to finally sponsor programs of the caliber Artos offers.”

The relationship between the Board and Artos* began when Artos asked the Board to collaborate on submitting a grant proposal for $25,000 from the Pastoral Excellence Network. The two-year grant activities included retreats and coaching for individual clergy spouses to help them establish their own healthy Sabbath rhythms—what Artos executive director Julie Anderman describes as periods of rest, restoration and worship.

The grant also funded development of a broader pilot program of workshops, and group and individual coaching for clergy, clergy spouses, and church leaders going through pastoral transitions.

“Only large non-profit institutions may receive a PEN grant, so we were grateful when the Board agreed to serve as the official grant requestor and fiduciary steward,” recalled Anderman. “From the outset, the Board wanted not only to support our efforts with carrying out the activities proposed in the grant, but also to offer partial sponsorship of programs beyond those listed in the grant.”

“We really believe God was at work in bringing us to the bishop and the Board,” she added. “I can’t imagine how we could be reaching clergy spouses today without them.”

Melanie Stewart, an Eastern PA Conference participant in the “Claiming Sabbath for Clergy Spouses” retreat, expresses special thanks for the funds that allowed her to take advantage of the post-program coaching: “The follow-up coaching was critical to guide, support and keep me accountable for establishing a Sabbath routine. I would still be floundering and spiritually exhausted if I hadn’t chosen to do this. I just couldn’t pass up the valuable opportunity, given the minimal cost. I’m thankful to those who donated the money to make it possible.”

During 2019, the Board has helped sponsor the following conference events led by Artos at various churches and retreat centers:

The Board’s support for clergy spouses in Eastern PA is also bearing fruit outside our conference, explained Anderman, who described her report to the Board’s Oct. 26 meeting, as a “praise report.”

For more information about Artos Retreats and all their programs, visit their website at ArtosRetreats.org or their Facebook page. Or contact Julie Anderman at Julie@artosretreats.org or 717.492.4238.

*Artos is a Greek word meaning “leavened bread,” a biblical reference to sustenance that has special meaning for Artos Retreats’ leaders.