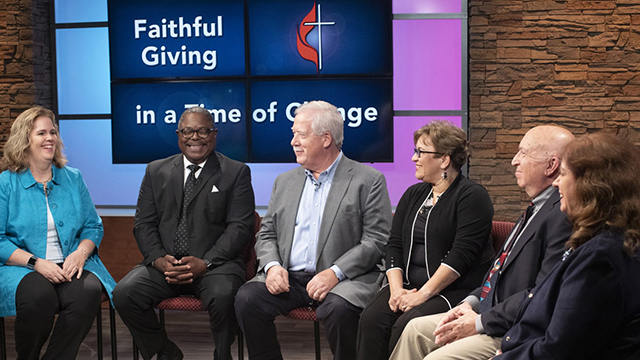 “Faithful Giving in a Time of Change,” a roundtable discussion of connectional giving in The United Methodist Church, is a video resource designed for local congregations to help explain the role of giving in the church. The panel discussion was designed and conducted by UM News staff. Photo by Kathleen Barry, UM News.

“Faithful Giving in a Time of Change,” a roundtable discussion of connectional giving in The United Methodist Church, features panelists who work with giving and budgets at all levels of the denomination.

The video discussion seeks to explain the role of giving in the church, as well as shed light on what has happened with apportioned giving in the denomination since the special General Conference earlier this year.

This page contains a video of the full discussion, as well as shorter videos that focus on specific discussions such as giving trends, the budget process and the apportionment system.

United Methodist News receives its funding from church offering plates. However, as a journalistic organization, it strives to provide fair, balanced and objective coverage of the denominational budget.

These news videos are designed to be resources for the church and particularly local congregations. Links to resources about giving can be found at the end of the full-length video. Information also can be found at UMCgiving.org/how-we-give.

UM News staff designed and conducted the panel discussion. Funding for this project came primarily from the Connectional Giving Marketing Team at United Methodist Communications, with additional funding from UM News. The conversation was recorded and produced by the Production Team at UMCom.

See the full roundtable discussion of giving in The United Methodist Church.

1. Giving: A Response to God
“Giving is an act of gratitude and of worship. It is truly what we do to respond to God; for all that God has done for us. It is a biblical mandate and we respond to that with gratitude and with joy,” the Rev. Reginald Clemons said during the discussion on connectional giving.

2. Giving Trends and Challenges
“So we are seeing some reduction in that, kind of maybe across the board, for the general church level. At the annual conference level, I can say that for North Carolina, we’re actually at this point in the year, just a bit ahead of where we were in previous years. So we don’t necessarily see that reduction there in North Carolina, and some of my colleagues in other annual conferences are reporting a similar thing, that they’re staying about where they were, compared to last year, in those giving levels.” — Christine Dodson on giving trends.

3. Setting the Church’s Budget
“I think one of the challenges that we’ve seen or I’ve seen at the local church level is a budget is just a plan. It’s a plan for the year and you have to fund that every Sunday, every week… . You have to help people understand how giving to that budget helps with ministry and makes ministry occur.” — John Pearce as the panel talked about local, general and annual conference church budgets.

4. How the Giving System Works
People refer to apportionment giving as a tax, a subscription, a franchise fee, all kinds of names, said Christine Dodson in a discussion of how the giving system works. “In my opinion, as I’ve gone through and been with local churches when we’ve talked about that and tried to help them understand the apportionment process and connectional giving in general, what I’ve found out is that when churches begin to understand the way that money is used, those names fall away, because they begin to understand that this is the way that we are in connectional ministry. Those are ministry dollars, they’re not a Netflix subscription that you pay and then you receive something back. You don’t give with that intention of receiving back, you give because God first gave to you,” she added.

5. Addressing Issues of Trust
Critics of the church say Christians are hypocrites, “That we don’t live out, we’re acting as if we’re Christians. And I would say that part of the way we play that out, to answer that, is to be the living embodiment of Christ in the world … . And we need to set aside our own peculiarities, our own idiosyncrasies, and things like that, and try to be Christ in the world. It’s challenging and Wesley would call that ‘moving on to perfection,’ that’s the goal for us. But how do we do that? We model it and model it and model it and when in doubt, model it some more.” — The Rev. Dennis Shaw on rebuilding trust in The United Methodist Church.

6. Supporting Racial-ethnic Ministries
“So when we don’t receive enough resources, the groups that are more affected in the local church and in the denomination are the racial-ethnics. We represent 10% of the denomination in the United States. That says that we need to work more of trying to reach out to people who are different to us.” — The Rev. Lyssette Perez on giving to racial-ethnic ministries.

7. Thank You: The Power of Gratitude
“We’ve gotta say thanks to the people of The United Methodist Church. People at my church have heard me say this: We can stand up in the pulpit and preach about stewardship until Jesus comes back. … And we can truly preach that. And if all the light bulbs go off and people get it, that doesn’t mean that they’re gonna give to our local church. That means they’re gonna give somewhere because they understood it. As we go through the process of letting people know the wonderful things that we’re able to do, we’ve just gotta take the time to say, ‘Thank you for supporting those things and thank you for all that you do to make The United Methodist Church what it is.’”
— The Rev. Reginald Clemons on the power of gratitude.

For more information, contact UM News at 615-742-5470 or newsdesk@umcom.org. To read more United Methodist news, subscribe to the free daily or weekly digests.