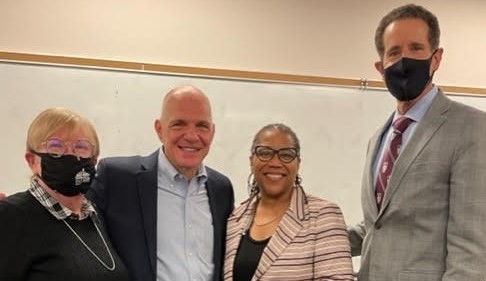 In addition to Thursday night seminary-wide chapel services planned by the school’s chaplain, the Tuesday evening programs are designed to present a “Wesleyan flavor,” says the Rev. Bronwyn Yocum, Director of Methodist Student Advising and Ethos. “Most, though not all, of the speakers are United Methodist, and we often use UM materials.”

Dr. Yocum says the chapels are open to anyone and are presented both in a classroom and on Zoom so that alumni can attend online. She helped start them when she was hired by the seminary in 2018 “to help it develop a closer relationship with the United Methodist Church.

“We have had bishops, district superintendents, conference leaders, area clergy, a UM hospital chaplain and a former clergy member who was called up to serve in Desert Storm.”

The Rev. Amy Banka, an alumna and pastor of Hopewell UMC, spoke Feb. 1, and talked with students about the challenges of starting ministry, since she leads the conference’s Residency in Ministry (RIM) program. Carmen O’Shea, new Director of Pocono Plateau Camp & Retreat Center spoke last week.

On Tuesday, Feb. 15, the Rev. Marilyn Schneider, a deacon serving at Grove UMC and leader of the conference’s Prison Ministry & Restorative Justice team, spoke, to be followed Feb. 22 by the Rev. Karen Bartkowski, Associate Pastor of Lima UMC and a 2021 alumna.

Because there’s only an hour break between evening classes, the chapels in the past were “Chapel and Chew,” with a light supper included. But the COVID pandemic stopped that practice for now.

“The chapel service is a half-hour break to hear a word from the Lord,” Yocum explains.  The services include prayers, scripture reading, sometimes music, a speaker and time to share joys and concerns. But Wesley’s Covenant Renewal Service and a group participation in Lectio Divina have also happened “with very positive results.”

“Last semester our student government leaders presented scripture through drama and then led a discussion of the scripture they had portrayed,” said Yocum. “And we are exploring the possibility of joining in with Marilyn Schneider and the conference Prison Ministry team’s Undies for Easter prison outreach project.  Our dean was the director of Eastern’s Prison Ministry program, and was very interested in connecting.”

Anyone interested in attending the UM chapel services via Zoom can email Bron Yocum at bronwyn.yocum@eastern.edu.