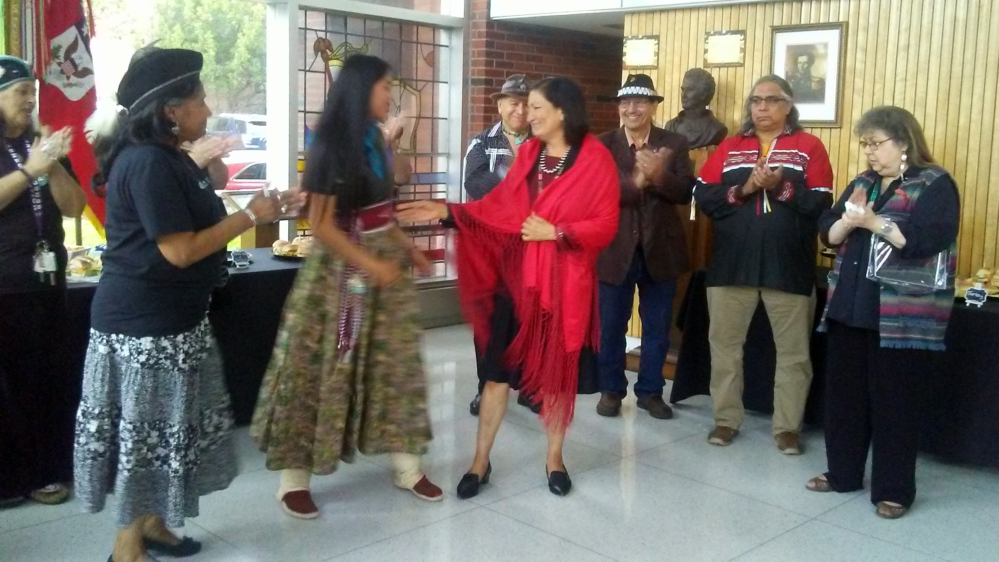 U.S. Interior Secretary Deb Haaland (here as a U.S. Congresswoman) is welcomed during the Carlisle Indian School Project's Jim Thorpe Sports Days, where she lodged in Jim Thorpe's former bedroom as a special guest. Sandra Cianciulli is applauding on the far-right.

Sandra Cianciulli, who co-chairs the Eastern PA Conference’s Committee on Native American Ministry (CONAM), will speak to students and faculty at West Virginia University August 5-6 about the former industrial boarding schools where many thousands of Native American children and youth were taken and forced to live in the late 1800s and early 1900s. Their often injurious experiences—intended to assimilate them into Euro-American culture—left a detrimental, painful legacy among many Native families and communities.

Cianciulli, a mixed-blood Oglala Lakota, born and raised in the Philadelphia area, is president of the Carlisle (PA) Indian School Project, site of the former, historic Carlisle Indian Industrial School, which is now the site of the U.S. Army War College and its barracks. She also serves on the Board of Directors of the Circle Legacy Center, based in Lancaster, one of two American Indian organizations in Pennsylvania. Carlisle was the first government-run, non-reservation boarding school for Native American children.

Gravesites of hundreds of Native children from similar board schools in Canada were discovered this summer, a shocking reminder of the sometimes fatal legacy of this North American tragedy. Canada has been confronting this past through truth and reconciliation efforts for years. Now some are calling for similar measures to happen in the U.S, where several church organizations, including the Methodist Church, also operated boarding schools for Native children.

“I want people to know this is a good thing,” Cianciulli told a local newspaper. “Finding out the truth, having transparency, listening to Indian people’s stories and taking them seriously.”