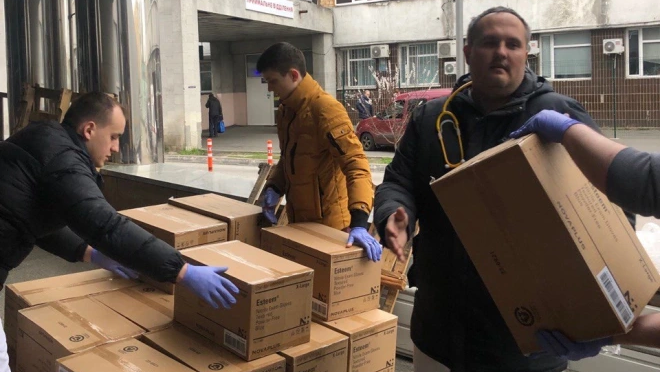 The United Methodist Committee on Relief (UMCOR), a Texas-based humanitarian organization focused on Ukraine and Ohio Health are collaborating to send 47,895 pounds of medical supplies and equipment worth $935,000.00 to three hospitals in Kyiv, Ukraine. AEC Parcel Services is handling transport of the supplies, which are being sent in three shipments.

The effort was put together by the Arlene Campbell Humanitarian Foundation, headquartered in North Zulch, Texas, which has links to health facilities in Ukraine. UMCOR is paying specific costs, including transportation, of approximately $160,000. Ohio Health, a not-for-profit, charitable, health care ministry of The United Methodist Church, donated the supplies through a medical surplus program. UMCOR put the foundation in touch with Ohio Health and opened the door to the United Nation’s Logistics Cluster to move the supplies into Ukraine after they arrived in Poland from the U.S. via chartered jet.

The first shipment arrived at the State Ukrainian Health Ministry Heart Institute in Kyiv on Thursday, April 14. The second shipment was shared between the Heart Institute, the Center for Pediatric Cardiology & Cardiac Surgery Clinic for Children and the National Specialized Children’s Hospital, which is the nation’s largest children’s hospital, on April 20. The third shipment is scheduled to follow soon, according to Roland Fernandes, general secretary of UMCOR and its parent organization, Global Ministries. “UMCOR is pleased to facilitate both the procurement and the transportation of essential medical supplies to war-torn Ukraine,” he said. “We multiply our own efforts and the generosity of our contributors when we engage in creative service partnerships.”

Lena Denman, president of the Arlene Campbell Humanitarian Foundation, expressed appreciation of UMCOR for its role in the project. “The Foundation is honored to receive the support of the United Methodist Committee on Relief for our efforts to provide medical supplies and medical equipment to the State Ukrainian Health Ministry Heart Institute in Kyiv, Ukraine,” she said. “This hospital serves not only Kyiv, but also suburbs of Kyiv that have experienced mass atrocities. It was because of the support of UMCOR and its contributors that we were able to arrange transportation for these three shipments of vital medical supplies.”

“This is the biggest shipment we have ever had,” said Dr. Vitaly Demyanchuk, deputy director of the State Ukrainian Health Ministry Heart Institute in Kyiv. “Every box contains useful supplies that give us the possibility of providing high quality medical care to our patients, for wounded individuals and others in our area. We thank all of the American people. Together we are strong.”

Playing a vital role in the transport of these supplies is AEC Parcel Services, a Chicago-based shipping company. AEC Parcel’s long-established connections with key points and customs agencies on the Ukrainian border has made them one of the few shipping companies still able to deliver regular parcels and aid from the U.S. and Canada. When war broke out, AEC partnered with several international nonprofits to provide greatly reduced overseas shipping costs to Ukraine and other affected areas.

The Arlene Campbell Humanitarian Foundation, founded in 2016, provides medical supplies for hospitals in Kyiv and helps facilitate physician training and research programs between U.S. and Ukrainian physicians. It continues the work of the late Arlene Campbell who, in 1989, started a not-for-profit agency called Russian Relief, one goal of which was to supply medical equipment and supplies to Ukrainians. The current foundation memorializes Ms. Campbell.

Ohio Health represents 35,000 associates, physicians and volunteers, a network of 12 hospitals, more than 200 ambulatory sites, hospice, home health, medical equipment and other health services in 47 counties of the state.

As part of the General Board of Global Ministries, the mission and humanitarian assistance agency of The United Methodist Church, UMCOR provides relief and recovery response throughout the world. UMCOR is extensively engaged in services for refugees from Ukraine both inside Ukraine and beyond in the wake of the Russian invasion of late February 2022.

To support UMCOR’s continued efforts to offer immediate relief and long-term recovery for the war in Ukraine, make a gift to Advance #982450.

Founded in 1940, the United Methodist Committee on Relief is the global humanitarian relief agency of The United Methodist Church. A part of Global Ministries, UMCOR works in more than 80 countries worldwide, including the United States and its territories. The agency’s mission, grounded in the teachings of Jesus, is to alleviate human suffering with open hearts and minds to all people. Working in the areas of disaster response and recovery, sustainable development and migration, UMCOR responds to natural or civil disasters that are interruptions of such magnitude that they overwhelm a community’s ability to recover on its own. Learn more about UMCOR by visiting www.umcor.org  or by following www.facebook.com/umcor and www.twitter.com/umc_umcor.

Elliott Wright, an information consultant for Global Ministries and UMCOR, contributed to this press release.