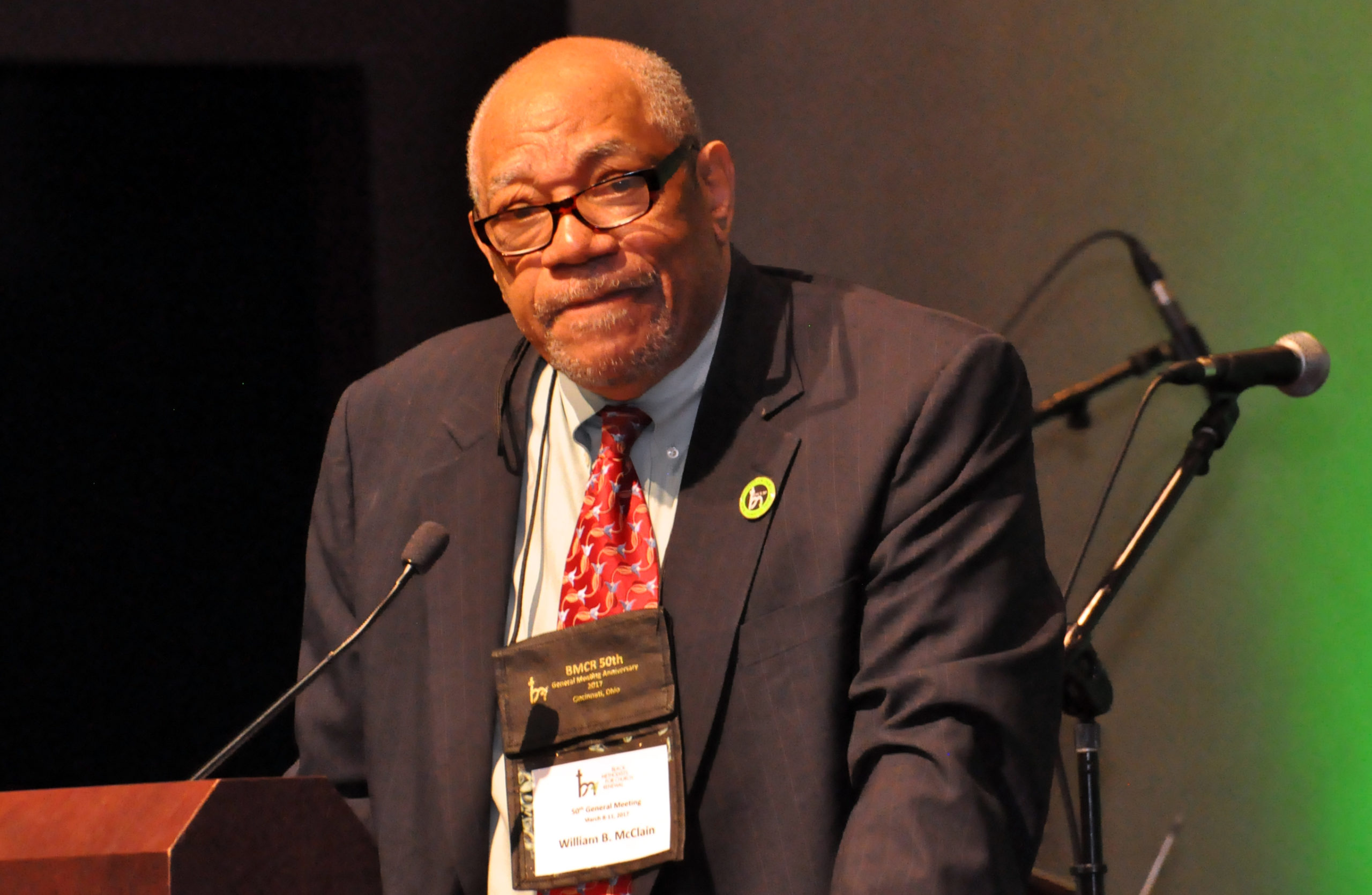 Heartfelt tributes and regrets are multiplying in response to the passing Wednesday, Nov. 18, of a venerable, much-loved United Methodist preacher and professor, the Rev. William B. “Bobby” McClain.

Dr. McClain was a Professor Emeritus of Wesley Seminary, in Washington, D.C., where he taught preaching and worship to thousands of students over 34 years. A celebrated, prophetic preacher himself, he also authored several books, advocated prominently for social justice and civil rights, and served as lead pastor of several historic United Methodist churches, including Tindley Temple UMC in Philadelphia.

McClain envisioned and led the creation of Songs of Zion, a landmark songbook celebrating music and worship in the African American tradition, published in 1981.

“I am sorry to share (that) our friend and colleague, William B. McClain died early this morning at home, announced Wesley Seminary president the Rev. David McAllister-Wilson. “One of the last of the young leaders of the Civil Rights Movement has passed. And a great hole opens up in the heart of the Wesley Seminary community. Read his full message.

“What will be the legacy of Dr. William B. McClain? About 2 million biblically grounded, theologically sound, prophetically and pastorally infused sermons have been shaped by the teaching of Dr. McClain. After 34 years in the Wesley classroom, it is foremost his students who are his legacy. And they will rise up and call him blessed.”

“The Eastern Pennsylvania Annual Conference was blessed to have Dr. Bobby McClain serve as the senior pastor of Tindley Temple a number of years ago,” wrote Philadelphia Area Bishop Peggy Johnson in a tribute. “His legacy of powerful preaching still resounds in Philadelphia.”

McClain last visited Tindley Temple to attend a gathering of Black UM leadership from around the Northeastern Jurisdiction Jan. 11 to strategize for the 2020 General Conference, which was later cancelled due to the COVID-19 pandemic.

“He was also a sought-after seminary professor and advocate for justice and equality,” Bishop Johnson recalled. “Just a few weeks ago, he was featured in the Council of Bishops’ webinar on Dismantling Racism, and he called the church to keep pressing forward in the struggle. The United Methodist Church has lost a prophet among us and we grieve his passing. We pray for his wife, Jo Ann and his family at this time.  May we find comfort in the hope of resurrection that Dr. McClain lived and proclaimed.”

The Rev. Eric W. Carr, Jr., Coordinator of the Philadelphia Black Methodists for Church Renewal (BMCR) caucus, extolled McClain as “a founder and giant of BMCR and the progressive movement of people of color particularly within the United Methodist Church. Words cannot express how much he will be missed.”

McClain faithfully participated in national meetings of the caucus he helped establish in 1967. He was the keynoter at its 50th anniversary gathering in 2007.

Condolences may be sent to his longtime wife Mrs. Jo Ann McClain and their family at 500 Round Table Drive, Fort Washington, MD 20744, or to joannmclain500@gmail.com. Jo Ann McClain was a former administrative assistant to the Executive Secretary of the Council of Bishops.

Funeral arrangements are pending. “The family has asked that any gifts made in memory of McClain be directed to the William B. McClain Scholarship Fund at Wesley Seminary to further his lifelong commitment to students preparing for the ministry,” wrote McAllister-Wilson. “His family has asked not to receive phone calls at this time.”

Read also “A Loss for GCAH and the entire UMC denomination,” written by the Rev. Rev. Alfred T. Day III,General Secretary of the UMC’s General Commission on Archives and History (GCAH), to honor William McClain as a member and Vice President of the Commission.

And McClain, theologian and civil rights leader, dies at 82.

Bobby McClain was not only a leader in preserving and promoting the history of the UMC, he was more—a history-maker, especially in regards to the history of African American Methodists and their seminal and continuous influence on the denomination’s past, present and future. Learn more