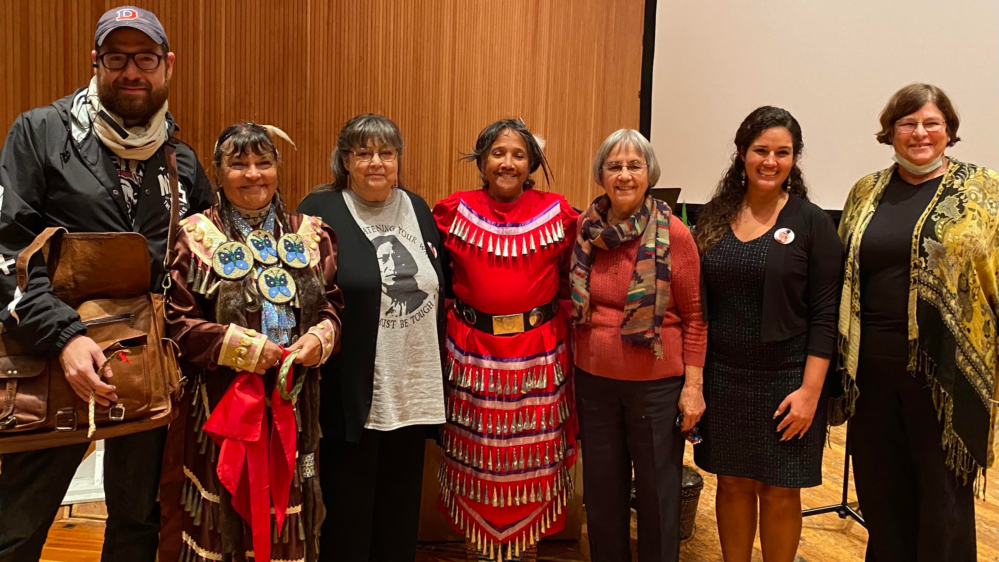 Ongoing efforts toward “Seeking Justice for Murdered & Missing Indigenous Women” were the focus of a recent talk by Elizabeth Rule, assistant professor of critical race, gender, and cultural studies at American University in Washington, DC, and a citizen of the Chickasaw Nation. EPAUMC Committee on Native American Ministries (CONAM) members Sandi Cianciulli and Verna Colliver went to hear her speak at Dickinson College in Carlisle, Pa., Oct. 26.

CONAM Native friends Boe Harris Nakakakena of Delaware and MaryAnn Robins of the Circle Legacy Center in Lancaster participated by providing music, dance and a Red Dress Display that vividly depicted the indigenous women whose lives have been brutally ended. Buttons and postcards with an artistic visual image of the Missing and Murdered Indigenous Women were offered to attendees as stark reminders of the silenced women.

The program, sponsored by the college’s Clarke Forum for Contemporary Issues, began with Harris, a member of the Turtle Mountain Chippewa from Spirit Lake Dakota, engaged the students with the voice of her traditional flute.

Elizabeth Rule, the keynoter, is a researcher who “primarily focuses on the barriers that Indigenous communities are facing in the 21st century and the importance of public education regarding Indigenous heritage in the U. S.” Her work has been published in prestigious journals, and she has traveled the world working to educate the Native American community and the general public in various venues.

Rule’s key points—the need to investigate the discrimination, to attack the racism and prejudice, and to correct the inaccuracies and lack of media coverage—were underscored by visual charts and images and by her referencing the red dresses on display. The students responded in the Q & A session with thoughtful questions to which Rule responded with clear and incisive answers.

Indeed, she held the attention of the audience, educating them on the history and pervasiveness of the injustice and oppression perpetuated for years by “settler colonialism” that continues to affect Native American communities today. “I was hanging on to every word, everything she said was inspiring,” commented Cianciulli, who expressed thanks to be honored with an invitation to the program.

Harris expressed her feelings this way:  “It was an honor and privilege to support Elizabeth Rule in her journey to bring awareness of seeking justice for murdered and missing Indigenous women and girls. As an elder, it warms the heart and spirit to see our young Indigenous women honor those who walked before, those who walk now and preparing the path for those yet to come.”

MaryAnn Robins aptly summed up the impact of Rule’s well-chosen words: “It is the voice of the young who shall carry our words forward.

John Legend said, ‘We can be Heroes and be the change that you want tosee.’  Rule is putting her words and footsteps for all those MMIW who have been taken from their loved ones, crying with voices clinging on the winds to bring them home.  I see the change that she is starting today.”

A Jingle Dance, the symbol of healing and spiritual wellness, performed by Boe Harris and MaryAnn Robins concluded the program, drawing an appreciative response from the audience.

A livestream recording of the program will be posted in the near future.