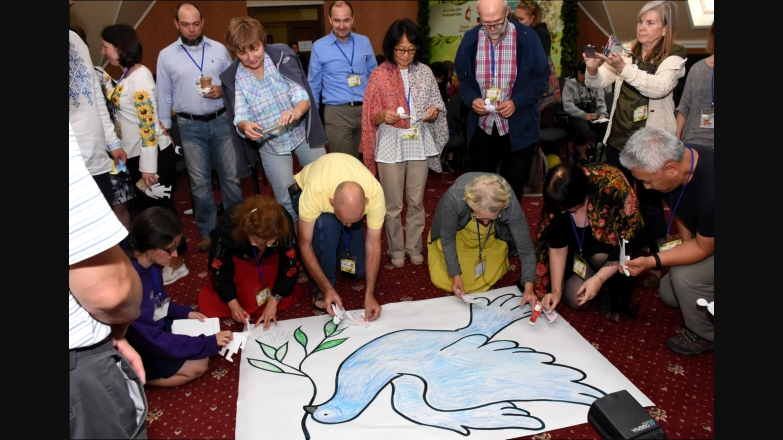 With increasing daily reports of Russia’s horrific war on Ukraine—the destruction of cities and the tragic loss and uprooting of lives—United Methodists are finding ways to respond with their support.

Many are donating much-needed funds through UMCOR (United Methodist Committee on Relief), which is working with partners in the region to help internally displaced people (IDP) and refugees through its International Disaster Response and Recovery (IDR) fund (Advance #982450). Together they are providing food, water, shelter and other needs with UMCOR funds.

Ways to give to support the people of Ukraine:

UMCOR allocates 100 percent of donations to intended projects to fund lifesaving efforts through the Advance. Please celebrate UMCOR Sunday March 27, and give to the churchwide special offering that supports its crucial administrative work.

The Ukrainian congregation is sending protective helmets and vests to vulnerable family and friends in the Ukraine, as its limited funds allow, according to Father Ivanov. In “a tearful conversation about the needs of our Christian brothers and sisters, he welcomed the support of United Methodist friends for this unthinkable yet necessary mission,” reported the Rev. Steve Morton, District Superintendent.

He hopes to make another donation to the Assumption of the Blessed Virgin Mary Ukrainian Catholic Church in Centralia, Pa., during a prayer service there on Sunday, April 3, at 6 PM.

The sprawling “Great” North District’s northwestern region “is home to many Ukrainian peoples, and sites of many Ukrainian Catholic churches,” Morton said. “Because our United Methodist pastors have personal relationships with these Ukrainian pastors, we have a unique opportunity in the North to make some immediate, local, reliable responses to support Ukrainian families and refugees through the ministries of their own faith communities.”

More prayers for peace
Meanwhile, Eastern PA churches continue to sponsor special gatherings to pray for an end to the brutal attacks and for the peace and wellbeing of the Ukrainian people. St. Andrew’s UMC, 999 York Rd. in Warminster, will host a prayer service on Thursday, March 24 at 7:30 PM. The service will be held onsite and also video-livestreamed on the church’s Facebook page. The church will also reach out to a local Ukrainian-American church to offer support.

Please let us know if your church will host or participate in prayer services or other supportive activities. Write to us at communications@epaumc.org or use our Submit News web page.

Ukrainian UM churches ‘overwhelmed’ but united
Although under attack by Russia, the small UM communities in Ukraine are also reaching out to help their neighbors, according to reports.

“The superintendent and pastors there are overwhelmed with local concerns, but they take time to stay connected to the church beyond their borders and (they) let us know what they are doing to respond to human needs,” said the Rev. Üllas Tankler, the Global Ministries European/Eurasian representative.

Based in Estonia, Tankler stressed that UM congregations in Ukraine, located mostly in cities, are few and small in membership. “We have 10 churches with combined communities of around 500 people,” he said. There is also a student ministry in Kyiv that appeals primarily to foreign students. The church in Lviv, in western Ukraine, has a strong student and young adult focus. Read “A church under siege.”

The Rev. Volodymyr Prokip, in Lviv, describes his church and student ministry’s efforts to help in a a video interview. “God is with those who are crying,” says Prokip, who with fellow United Methodists has provided food and temporary shelter to those headed out of the country. Read more about United Methodists in Romania, Hungary, Slovakia and Poland providing shelter, food and other help for those who have fled Ukraine: “United Methodists in and near Ukraine help refugees.”

Missions agency head ‘deeply troubled’
Finally, Roland Fernandes, who headsUMCORand Global Ministries in Atlanta, said he is “deeply troubled” by the conflict between Russia and Ukraine and the ominous implications it has for escalating tensions between Russia and Western nations. “We join many Christian leaders and organizations worldwide in deploring the Russian invasion of Ukraine on Feb. 24, and we ardently pray for a redirection of military action toward diplomatic measures to resolve grievances,” said Fernandes.

He expressed particular concern for the welfare and unity of UM “mission-founded congregations in both Ukraine and Russia, some from the pre-Soviet period and others dating from post-Soviet years.” Both countries are geographically within the Eurasia Episcopal Area and relate to the denomination’s central conferences of Europe. Bishop Eduard Khegay, the resident episcopal leader in Eurasia, is based in Moscow. Learn more.