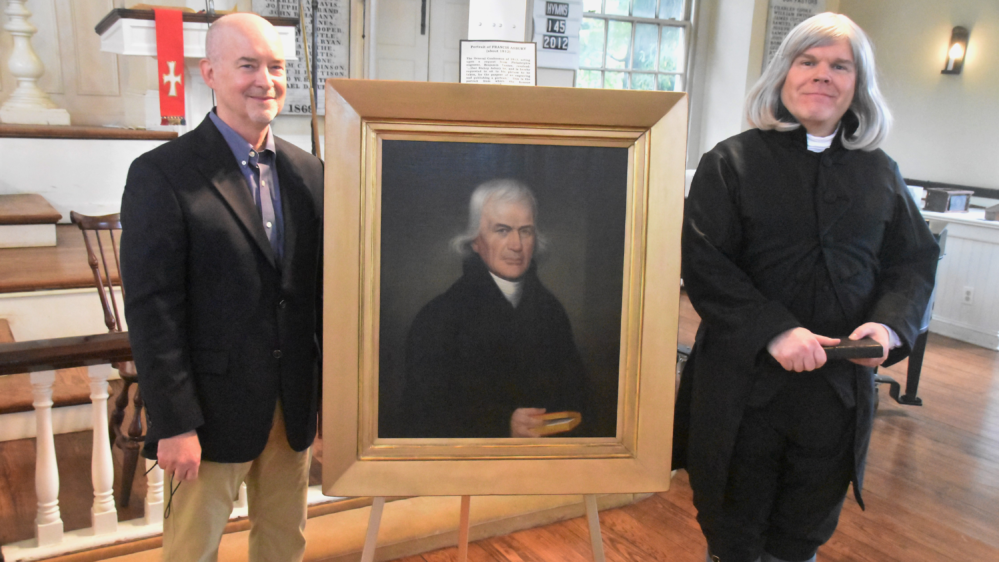 View Photos & Videos:
– Click here to view video-recordings of the historical Asbury Crossing programs, including a one-hour edited version of the full two days of presentations and a 3½-minute abridged version with scenes and sound bites.
– Also see our Flickr album of photos from the event: Asbury Crossing 250th Anniversary Celebration, October 30-31, 2021

A 250-year journey in time, remembered over seven weeks, reached its summit Oct. 30-31 in a weekend celebration of Francis Asbury’s 1771 voyage, at age 26, from his native England to the British colonies to spearhead the organization and early growth of the Methodist Church in America.

The celebration happened at “Historic” St. George’s United Methodist Church in Philadelphia, the oldest Methodist church in continuous use in America and where Asbury first preached. He was sent here by Methodism’s founder John Wesley, a British Anglican priest, to bring order and direction to the fast-growing population of American Methodists. Speakers revealed through an insightful lecture, a dramatic performance and a rousing sermon the religious pioneer’s personal history of fearless faith and fallibility.

They also emphasized his humble piety and his remarkable ability to connect intimately with people, including the many adherents he drew to the fledgling new denomination.

The sestercentennial celebration, titled The Asbury Crossing: Responding to Call, had begun in Great Britain in mid-September with several events sponsored by the Methodist Church in Britain (MCB).   It culminated before nearly a hundred attendees over two days of witness and worship, remembrance and reflection that viewed the transformative past and tenuous present of The United Methodist Church, a church that once more may be on the verge of schism.

Participants who came to commemorate American Methodism’s first bishop, fittingly on the eve of All Saints Day, included his chief biographer John Wigger, a noted historian, professor and author of American Saint: Francis Asbury and the Methodists.

He traveled over 230,000 miles by horse, moving “more extensively across the American landscape than probably any person of his day,” said Dr. Wigger in his featured Saturday lecture. He recalled how renowned Asbury was, despite his voluntary poverty and humility, as he visited countless homes and Methodist churches and societies, inspiring many to name their churches—including more than 300 still today—and even their children after him.

Although he and many others doubted his preaching ability, Asbury “preached more than 10,000 sermons and ordained probably 2,000 to 3,000 preachers,” said Wigger. Yet, his key gift was in connecting with individuals and learning their customs in order to effectively propagate the gospel and Wesleyan teachings wherever he went.

But he regretted not mandating adherence to the Methodist prohibition against ministers owning slaves. It was a flawed, strategic decision made to avoid hindering Methodism’s spread, especially in the slave-holding South.

Wigger also spoke about Richard Allen, who left St. George’s because of racism there to start the African Methodist Episcopal Church and its first congregation, nearby Bethel AME Church. And he highlighted Jerena Lee, a pioneering African American clergywoman ordained by Allen.

“The need was strong for Methodists in America. The sheep were willing, but the shepherds were wanting,” said Dixon voicing the peripatetic Asbury’s disdain for local preachers who clung to the comfort and familiarity of home. “Frontiers were just as much in need of the gospel as the cities….There were miles to travel, souls to save, hearts to warm.”

“I am going to live to God and bring others so to do,” read the Rev. Dawn Taylor-Storm from Asbury’s writings in her opening welcome statement on Saturday.

In his closing sermon on Sunday, Bishop John Schol summed up the Methodist trailblazer’s shortcomings and low expectations as a missionary preacher, but noted his great success nonetheless in achieving his mission. “Through Francis Asbury God created a powerful movement called Methodism here in this new and emerging nation…. Isn’t that the way of God, that God can take what others don’t see and make something of it?”

Schol, episcopal leader of the Greater New Jersey and Eastern PA conferences, alluded to the denomination’s threatened split over rules against ordaining LGBTQ members as clergy and sanctioning same-sex marriage. Rather than the current trend of “tending to the character of who’s in and who’s out,” he said, “Asbury would want to free us today by tending the soul, the values, the beliefs, the character, the mission of the United Methodist Church.”

Schol was joined in celebrating Holy Communion by New York Area Bishop Thomas Bickerton, newly elected as the next President of the UMC Council of Bishops, and by Bishop Jeffrey Leath, Ecumenical Officer of the African Methodist Episcopal Church.

Also participating was the Rev. Mark Salvacion, St. George’s host pastor; Ashley Boggan Dreff, General Secretary of the UMC’s General Commission on Archives and History (GCAH); and her GCAH predecessor, the Rev. Fred Day, who led the celebration’s planning team. In her welcome the Rev. Dawn Taylor-Storm, Eastern PA Conference Director of Connectional Ministries, also read a greeting from the Rev. Ruth Gee of the British Methodist Church. GCAH contributed planning help and resources to the celebration’s success, in addition to Historic St. George’s UMC, UM Communications, the Eastern PA Conference, the Greater New Jersey Conference, the Historical Society of the UMC and others.

The local Chestnut Street Singers, an ensemble of the Philadelphia United Methodist Mass Choir (above), and vocalists Bruce Adams and Willa Douglas all performed music, including songs by John Wesley’s brother Charles Wesley.

View Photos & Videos:
– Click here to view video-recordings of the historical Asbury Crossing programs, including a one-hour edited version of the full two days of presentations and a 3½-minute abridged version with scenes and sound bites.
– Also see our Flickr album of photos from the event: Asbury Crossing 250th Anniversary Celebration, October 30-31, 2021