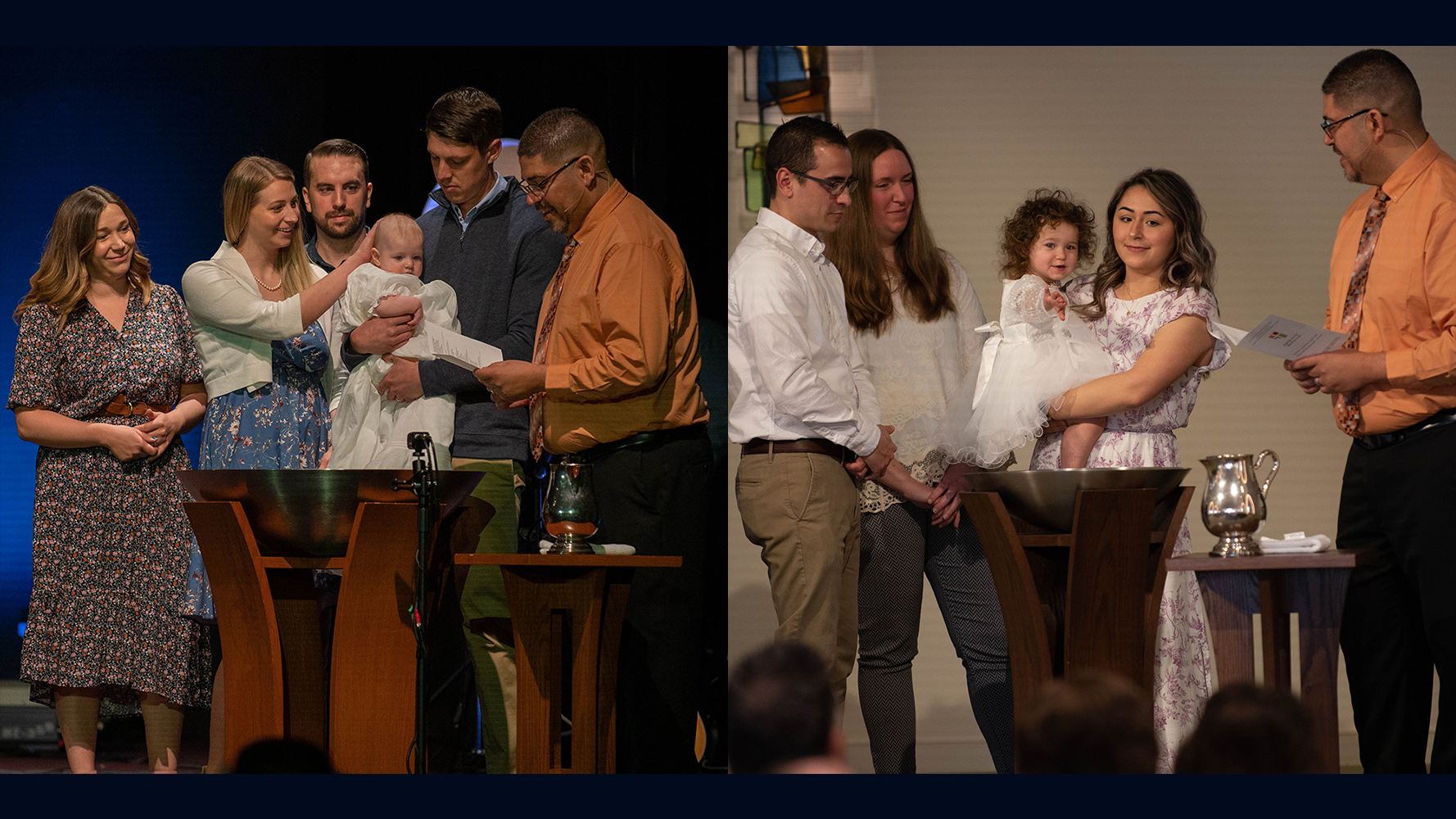 “Teamwork makes the dream work,” wrote leadership guru John Maxwell in 2002. While the adage is fast becoming cliché, it could nonetheless describe what’s happening at New Hanover UMC in Gilbertsville.

Leaders there are focused on forging more cooperation particularly in the overall worship experience, as they dream of making new disciples of Jesus Christ. And the 31 new members who have joined the church so far this year, including 10 adults and eight infants who were baptized, may represent some of the plentiful fruit from their efforts.

Church staff found themselves working in virtual silos during the Covid pandemic, said the Rev. Jose “Ricky” Ayala, senior pastor, as leaders focused narrowly on their own responsibilities to adjust to the many challenges they had to face. But now, as the pandemic wanes, their efforts are focused on increasing teamwork where staff members share responsibilities more as needed. That includes working together to enhance church hospitality and worship.

The team’s intense planning—aided by a certified John Maxwell Leadership coach—will move from posted sticky notes full of ideas and tasks to sharing with the congregation an updated strategic plan this fall, said Ayala. Leaders will connect the church’s vision and mission more closely to its core values when they present that plan over six Sundays in October and November.

As for worship, “we’re focused a lot more on setting the full atmosphere, from the church lobby to the stage,” New Hanover’s fifth-year pastor explained. Part of that means letting members and visitors see staff working together to welcome and serve them, sharing tasks and supporting each other, while visibly enjoying their ministry together.

‘People are excited to come to worship’

“People are excited to come to worship,” said Ayala. That reaction may come partly from the deeply spiritual music included in the worship program, both rehearsed and improvised. Daniel Mojica, Director of Worship and Arts for the past year, leads a five-member Worship Ministries Team, a choir and an orchestra, supported by a Technical Arts Team.

“We’re very clear that we’re not doing a performance; so not everything has to be perfect,” said Mojica, who like Ayala was born in Puerto Rico. “But it has to be with the right intention, with the right heart and with humility.” Often, he improvises music at the beginning of worship, inviting the choir, orchestra, pastor and congregation to join in as they feel led. “You plan and rehearse the music carefully; but you need to also leave space for God.”

Mojica described as “beautiful” the moment during a recent service when the singing suddenly stopped. The musicians continued to play, and the singers began praying aloud and praising God. “I said, ‘There’s no rush; we’re waiting for God.’ And then one person from the worship team who felt the Spirit of the Lord started singing. I joined her, and then everybody jumped in. It was just so powerful.”

Indeed, that beautiful moment demonstrated, in a word, teamwork.

“I think the hardest thing to achieve is that continual balance between preparation, performance and real worship,” said Gil Vining, Associate Pastor for Outreach. “That’s really hard, you know. But by bringing in the impromptu experience, it draws us naturally more toward worship.”

Ayala received a message from one woman who wrote, “Something was happening in our church today. Because I look over and there’s tears in my husband’s eyes.”

He added, “I want people in our church and community to say, ‘If you want to be engaged in worship and feel the presence of God, if you need spiritual healing or want to feel joy, then come to New Hanover.’”

The presence of God was deeply felt by many during worship June 12, when the church received 26 new members and Ayala baptized six infants and also five adults by immersion during the three services. That included “two mother and daughter combos,” he said, who got to watch each other being baptized in a water tank.

He even had a microphone placed near the water so it could be heard splashing. “We incorporate baptisms into the life of the service, as we witness the sacrament together.”

Persons baptized had voluntarily recorded testimonies about why they desired baptism. The congregation was surprised and moved by hearing their testimonies played aloud as they approached the stage.

The church offers baptism quarterly. Ayala baptized five adults and two infants March 20. “We plan to offer one more membership class in the fall,” he said, “and one more opportunity for adults to get baptisms by immersion in September.”

It’s not just the music and sacraments, but also the preaching that draws people. Ayala preaches candid, topical sermons, often in creatively titled series, that people can relate to in their lives and learn from. The recent “Elephant in the Church” series wrestled with controversial concerns of life, morality and faith.

New Hanover’s worship is fully online, with livestreaming of its 9 and 10:30 AM Sunday services and a church app, social media interaction and recorded sermons offered as podcasts.  Online hosts answer submitted prayer requests received during services, with follow-up prayers provided by Stephen ministers.

The church also plans special events to invite people back to church, including those who have gotten comfortable worshiping at home. An entertaining series of “Second Summer Sundays” offers outdoor activities and relaxation. The second gathering, July 10, will feature a movie night showing of the popular, animated film “Encanto” at 8 PM. And the August 14th gathering will feature a block party with fun activities and treats. Both will happen on New Hanover’s nearby North Campus.

About 400-500 people on average attend the three worship services onsite now. The average was up to about 800 before Covid, when there was also a fourth service on Saturday evenings. Gil Vining is trying to encourage more absent members to return. “I’ve got pages of names. I’m calling them constantly and saying ‘Hey, where’re you at?’ Some have gotten comfortable worshiping virtually at home in their pajamas.”

But he emphasizes to them and others “what a wonderful, almost visceral worship experience they can have here onsite. It’s not easy to get that sense of worship atmosphere when you’re watching on the screen. There’s no comparison. Here you’re in that space where the Holy Spirit is moving among the people together. Some who have come back have said to me, ‘I was watching online, but it’s far better to be here.”