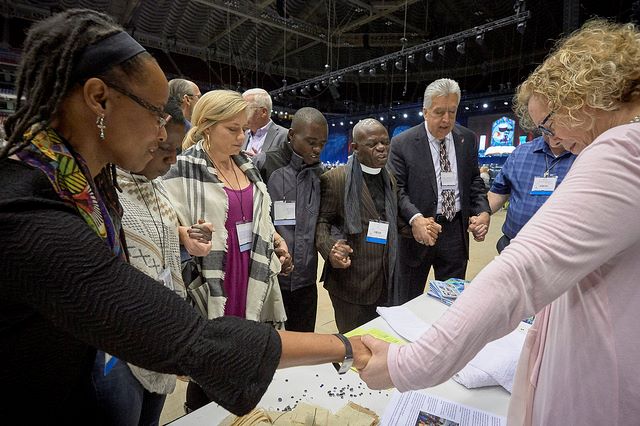 Still, be still. This has been my centering word and centering prayer.  Today we prayed and laughed and were in silence but we did it together. Sometimes it was hard to find the right words to pray, but when I couldn’t hear the words, my fellow delegates, Bishops from around the global connection filled in the blanks and made my prayer complete. There may be a lot of noise around me but God knows me and knows my heart and loves me.

There may be a lot of noise around us trying to tell us that we cannot be a united church, but the spirit today reminded me that we are important to each other’s survival and that we truly do love each more than we disagree. I can’t imagine this church any other way.

Nearly 900 United Methodists from around the globe settled into their highly secured meeting venue in St. Louis, Mo., on Saturday, Feb. 23, for the four-day Special Session of General Conference to decide together the future of their denomination. Eight Eastern PA Conference delegates, plus two alternates, were among them.

While the venue, known as The Dome at America’s Center, once housed an indoor football stadium for the former St. Louis Rams, the goal of this gathering was to choose among several competing denominational plans while avoiding the competitive, bittersweet syndrome of winners and losers. Thus, the entire first day was devoted to inspirational, collective prayers, enriched by heartfelt testimony, Holy Communion and soul-lifting music sung in multiple languages.

“The music was beautiful and well-matched with all the scriptures and spoken words,” said Eastern PA delegation co-leader Judy Ehninger. “But moreover, it was perfect for the delegates to sing together again, reinforcing the sense of unity and togetherness. The ten minutes of silent prayer was also a very powerful experience—over 900 people silently praying for ten minutes.”

After months of “life-enhancing” prayer and preparation, the Rev. Jeff Raffauf felt “an overwhelming flood of emotions” upon entering the arena. “This is a place where we are praying that God will move in a mighty way,” he shared on his personal blog. “The enormity of this moment, and the impact our decisions may have on the Church today, and into the future, nearly brought me to tears. What a privilege to be a part of this process.”

Following Sunday morning worship, Feb. 24, the prayers and songs will fall silent and the hard work of legislating will begin—the speeches and debates, the vetting of petitions, and the prioritization and “perfecting” of one plan above all the others. It’s like the old political axiom about campaigning in poetry but governing in prose.

In the end, it becomes a competition. Some demand a church where everyone loves and follows inscribed biblical and church law—Scripture and Tradition first in the Wesleyan Quadrilateral. Others demand a church that affirms emerging, all-embracing forms of love above the law, offering instead a nod to evolving Reason and Experience.

Or maybe we will see a miracle unfold in our midst. An unlikely miracle of revelation, reconciliation and prevailing unity that defies all signs to the contrary. A miracle worth praying for perhaps?

As most attendees seemed to ignore the small group of protesters holding signs and hurling shouts of eternal condemnation across the street from the convention hall, LGBTQ delegates and observers also felt ignored during the morning session. As Griffin reports, they went unmentioned in all the statements and prayers led by the international panel of bishops.

Some of them spoke to the bishops during the lunch break. When the body reconvened, Bishop Debra Wallace-Padgett of North Alabama said, “We see you. We are together as part of the Christian body, and when one suffers we all suffer. We need to care for one another, stretch the hand of sacred love to one another, knowing we are children of God. With the heart of Jesus, we move into prayer time specifically for LGBTQ siblings that are here and around the world.”

As the choir began to sing the song “I Need You to Survive,” people formed circles with LGBTQ delegates as one waved a symbolic rainbow flag. Around the Dome voices sang the lyrics, “I won’t harm you with words from my mouth, you are important to me. I prayed for you, you prayed for me, I need you to survive.”

New York Conference delegate Dorothee Benz, who had helped organize a rally and dialogue with LGBTQ attendees on Friday, expressed her qualified approval.

“I was moved by those who came and stood with us and embraced us,” she said in Griffin’s story. “We will continue to remind the church that we are here, we are as worthy of mention, as faithful, as integral to the church’s future, as any Methodist.”

“For me, the day of prayer focused our time at General Conference in a spirit of humility and a posture of prayer,” reflected the Rev. Dawn Taylor-Storm, delegation co-leader.  “We were reminded that we are disciples before delegates. We also focused on the prayer needs of our global church—from the needs of refugees in Germany to the limitation of religious freedom in Russia. We celebrated the global impact of the UMC through UMCOR, local churches and new faith communities.

“We also prayed together as delegations,” she continued. “One of the most powerful moments was passing the peace with fellow delegates and using these words: ‘If I have harmed you intentionally or unintentionally, please forgive me. I offer you the peace of Christ.’  May this spirit of reconciliation guide our work over the coming days.”

Sweet hours of prayer begin GC2019
ST. LOUIS (UMNS) — United Methodists from all points of the globe spent six hours praying for the church before beginning the 2019 General Conference’s hard work of reviewing church policy regarding homosexuality. After supporters of changing those policies raised concerns, the second half of the program began with an emotional call to pray for “our LGBTQ brothers and sisters.” Kathy L. Gilbert reports. Read story

Petition 90052 is unconstitutional, the court said in Decision 1375 “because it infringes upon the right of the annual conference to vote on all matters relating to the character and conference relations of its clergy members.” A second petition, Petition 90078, is unconstitutional because it would create a global episcopacy committee, the decision said. That petition is part of the Modified Traditional Plan. Learn more…

Ways to follow what’s happening at GC2019
ST. LOUIS (UMC.org) — United Methodist Communications is livestreaming proceedings at the special General Conference in English, French and American Sign Language. The stream at umc.org/live will include all open sessions when the lawmaking assembly meets Feb. 23-26. Visual learners also can view a chart that offers an overview of four main plans under consideration.
Watch the livestream
See chart on plans heading to GC2019
More resources on GC2019