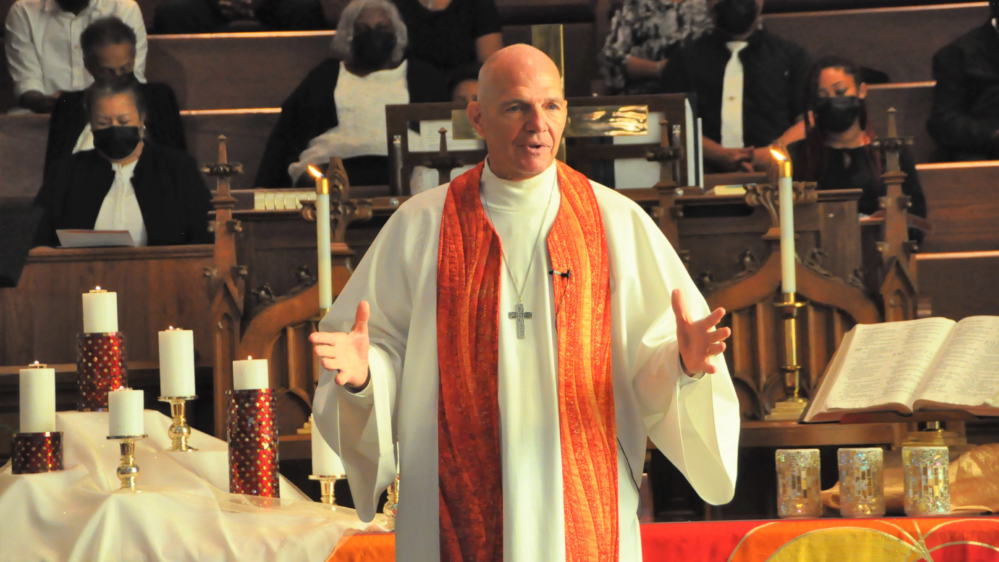 The Eastern PA Conference officially welcomed Bishop John Schol as its new episcopal leader Sept. 18 in an august worship service at the UM Church of West Chester. But what climaxed the Saturday morning service was the bishop’s sermon that shared his three primary hopes for the conference’s laity, clergy and congregations.

He first expressed a hope for laity. “Today, my hope for laity…is that every one of you hear the calling of God.… God’s got a calling for every lay person in the Eastern Pennsylvania Conference. And it’s my hope that all of our pastors will continue to preach about everybody’s calling, and nurture people into ministry.”

He then encouraged clergy with his desire for them to “be yourself, not what somebody else is trying to make you, not what you’re trying to make yourself into, but the person God has called you to be to lead in congregations and ministry, all across Eastern Pennsylvania and around the world.”

And finally, the bishop, who now serves United Methodists in Eastern PA, along with leading those in Greater New Jersey since 2012, voiced his key hope for congregations.

“My hope for every congregation is that you would get to know the people in your communities and offer them the grace of God,” he said. “Not on our terms, but on their terms; not in our language, but in the language that connects with them. Not in the ways we want them to conform, but in the ways that God wants us to become Christ.”

Bishop Schol recalled the beginnings of his own faith journey at St. James UMC in the Olney community of Philadelphia. That is where he gave his life to Christ and was confirmed as a youth, and where he later married Beverly Schol 43 years ago. Among other memories, he recalled learning to just be himself as a new bishop in the Baltimore-Washington Conference in 2004 and not strive to imitate his venerable predecessors in that role.

Sharing compelling stories from his life as a pastor, the bishop recalled a longtime local church treasurer who reluctantly surrendered that role but discovered his true calling by serving meals among the poor at a Salvation Army. And he recounted a long-ago subway ride encounter with a fellow passenger who interrupted his solitude to coarsely but candidly share his poignant life-story.

Both stories exemplified Schol’s hopes that the people and churches called Methodist might have similar experiences of discovering both callings and connections in their communities.

The multicultural service began with a “Blessing of the Four Directions” by Committee on Native American Ministries co-chairwoman Sandra Cianciulli, who is Oglala and Lakota, followed by the singing of “We Are Marching in the Light of God” in three languages. It ended with “Marching to Zion” for the recessional.

In-between there were warm, hospitable greetings to Bishop Schol shared from the pulpit and by video livestream viewers in the online chat section. Nearly 300 viewed it via West Chester UMC’s livestream video, as the recent surge in cases of the COVID-19 pandemic limited onsite attendance. (A recording of the livestreamed video can be viewed on the Eastern PA Conference YouTube page and downloaded via Dropbox to share with congregations. See below.)

“We welcome you home to the state of the best sports teams and to the historic roots of both Methodism and our rich EUB tradition,” said the Rev. Dawn Taylor-Storm in her greetings to the bishop, his family and other guests. “Today also marks a moment of new partnership for Eastern PA, as we celebrate the gifts that Greater New Jersey (GNJ) and Eastern PA share.”

Taylor-Storm, who is Eastern PA’s Director of Connectional Ministries, remarked that the newly linked conferences “are both committed to vital congregations, raising up new disciples and working intentionally towards racial equity and a church that reflects the beauty of God’s beloved community.”’

The Rev. Sang-Won Doh, Dean of the GNJ Cabinet, also brought greetings from his conference, while offering a glimpse of its strengths, including its “510 churches, 490 active clergy and 81,492 members. I’m more than excited that we become sister conferences, as we now share the same bishop.”

A diversity of faces and voices highlighted the service, including various liturgists, Cabinet members, persons who presented the traditional “Signs of Episcopal Ministry” to the conference’s new bishop, and music by the popular Philadelphia United Methodist Mass Choir and a Korean American choir, among other performers.

In addition to his sermon, Bishop Schol celebrated Holy Communion, assisted by two deacons, before offering a dismissal with blessing. An offering was received to support the EPAUMC’s Dismantling Racism efforts waged by several conference ministry committees and leaders.