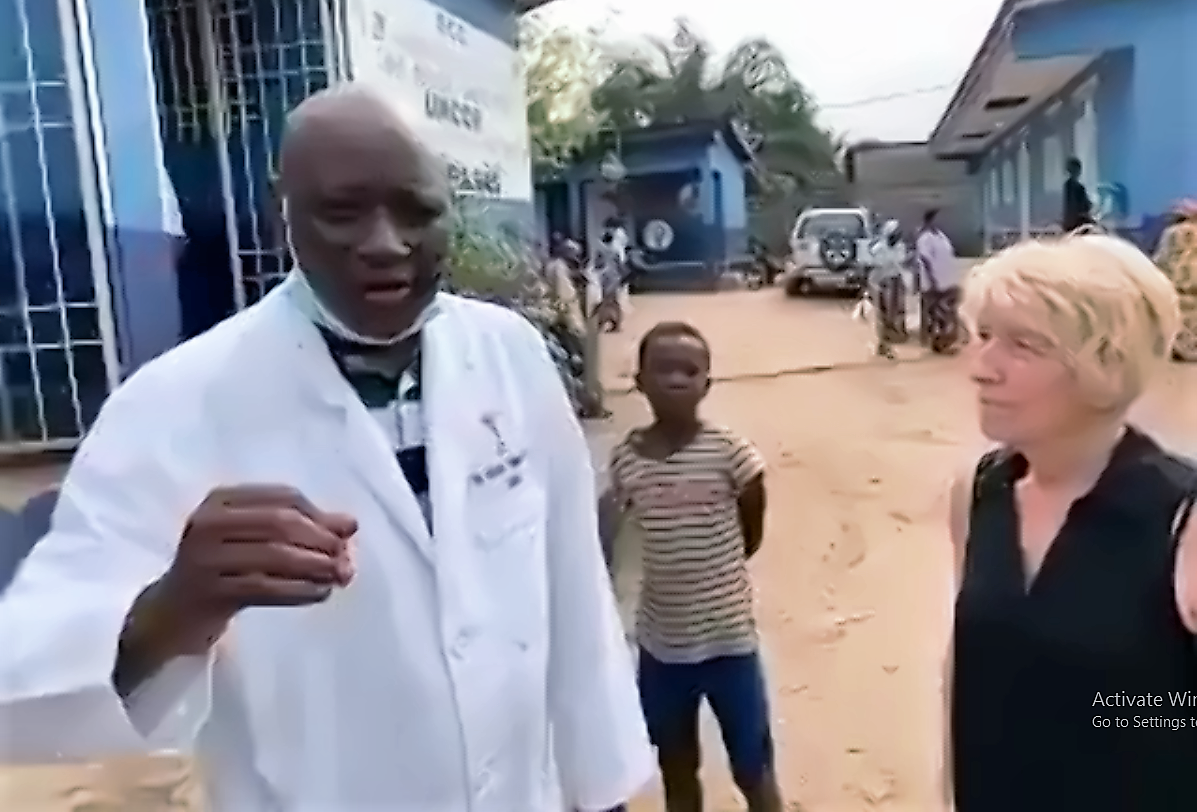 Dr. Yamba Yamba (left) head of the Mpasa Medical & Nutrition Center in the DRC, leads a Congo Partnership video tour of the center via Zoom Feb. 10, along with former missionaries Donna (right) and Jonathan Baker.

The Peter D. Weaver Congo Partnership, now 20 years old, welcomed the Eastern PA Conference on a live video tour of its Mpasa Medical and Nutrition Center on Thursday morning, Feb. 10. With developmental aid from EPAUMC, the center serves residents in sprawling Mpasa, outside of Kinshasa, the capital of the Democratic Republic of Congo.

The Rev. Jonathan and Donna Baker, both retired missionaries who staffed the partnership from 2015 to 2018, used Zoom video-conferencing on their smartphones to show staff, clients and activities at the clinic. The 30-minute virtual visit introduced us to lifesaving, life-changing mission work—in medicine, education and entrepreneurship—aided by EPA prayers and donations.

The tour, hosted on Zoom by the Rev. Dawn Taylor-Storm, Director of Connectional Ministries, featured the center’s facilities and activities, as well as staff and some of the children and adults they serve. Dr. Yamba Yamba, who heads the center and speaks eight languages, introduced viewers to people and programs, moving from building to building.

The Mpasa Medical & Nutrition Center was started in the late 1990’s by the United Nations & UMCOR (UM Committee on Relief) to serve refugees coming to the area from war-torn neighboring countries. The Congo Partnership—involving the Central Congo, Eastern PA, Peninsula-Delaware and Western North Carolina conferences—began in 2002.

In front of the nutrition building, we saw some of the 250 children who are fed daily greeting viewers on Donna Baker’s cellphone. Inside, elderly women, some wearing Congo Partnership t-shirts, received bags of chicken and rice to take home and cook for their families.

We also saw the area where a UM church gathers; and we heard a group singing, accompanied by drums. On the porch we met women who recently graduated from the New Life Skills program, where they are trained in sewing, soap making and tie dye techniques.

We saw one woman operating a sewing machine by hand. Money from EPA provided microloans for each woman to get a sewing machine and cloth to start her own business.  If they repay $100, the rest of the loan is forgiven.

The pediatric building is the newest and was built with money from EPA’s South District, which also provided money for solar power.  New babies were being brought to the porch to be checked out. Inside, are two operating rooms which are well-equipped by Congo standards.

A solar-powered electric pump provides fresh water for the hospital and surrounding community. The roof of the pediatric building was built to collect water into a cistern for bathing.

The laboratory in the pediatric building has refrigeration to provide services to all the other labs in this area of the DRC. The maternity building has beds with malaria nets.  We saw a woman and baby who had been delivered by C-section.

The hospital and nutrition center serve an area with 100,000 people. But they have ongoing critical needs, including an x-ray machine and electrocautery machine, and a nurse anesthetist.

Despite challenges with low Zoom band-width that caused frozen and distorted video at times, it was a special opportunity to see our Congo Partnership—the people, the places, the programs and the possibilities—all in action.

Several viewers wrote in the chat section of their desire to know more about the ongoing needs. Others expressed gratitude for seeing and being a part of God’s miracles happening in Mpasa.

Thank you to Deaconess Barbara Drake, EPAUMC’s Global Missions Secretary, who wrote portions of this article.