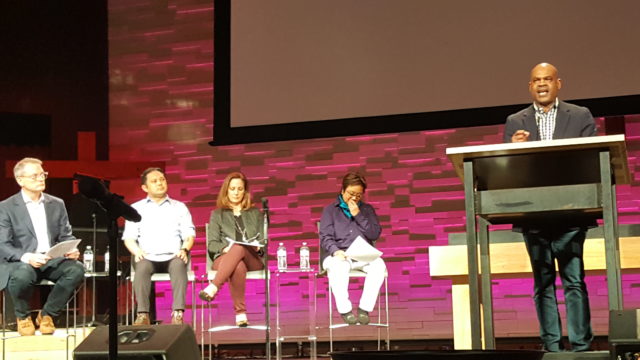 Several speakers repeated those challenging questions at the UMCNext conference, May 20-22, hosted by Church of the Resurrection UMC (COR) in Leawood, Kansas. No doubt, others have also. Who will stay in The United Methodist Church and try to make it better? Who will leave to chart a new denominational path? And when—right now or before or after the next General Conference in May 2020?

At least 11 lay and clergy members of the Eastern PA Conference attended the historic, closed-door meeting of more than 600 participants from every annual conference. Each was nominated or self-nominated and then selected, from more than 2,000 nominees, to be invited to the conference. All attendees were to pay their own expenses to avoid using church or conference funds.

Self-described as either centrists or progressives, they wrestled with how to respond to UMC laws that continue to deny marriage and ministry rights to homosexual members and that now call for stronger enforcement of those laws—or what traditionalists call “enhanced accountability.”

Some local attendees reported on what they learned at a meeting June 1 at St. Matthew’s UMC of Valley Forge, following a Reconciling United Methodists’ (RUM) event, “Rise and Resist: A Worship Celebration of Praise, Power and Persistence.”  That worship gathering of over a hundred people featured inspiring music and messages offered in scriptures, homilies, dance and liturgy, including a renewal of the baptism covenant.

Suggestions of what to do next

Attendees at the meeting discussed what happened at UMCNext and suggested next steps to be taken to try to remedy the painful consequences that many see resulting from the Traditional Plan. Much of that plan, passed by the Special 2019 General Conference in February, was ruled constitutional by the Judicial Council in April. The UMCNext seminar identified three possible paths forward:

If anyone came hoping UMCNext would produce a single plan or direction, they may have left disappointed. There was no consensus on any of the three options. So, for now, they will explore all three paths forward and may even witness a gradual departure. Some churches and conferences may begin by resisting, then move toward disaffiliation to become independent or aligned with other judicatories. And some may finally join or help form new denominations if The United Methodist Church is dissolved.

“We have to fix this denomination. We can’t go on with things the way they are,” said the Rev. Adam Hamilton, host pastor and lead convener of the meeting. “But there are churches who feel every urgency that they are going to leave now.”

His vast, remarkable church, which averages a denomination-leading 7,000 worshipers weekly, has some traditionalists among its centrists and progressives, he reported, and COR has both lost and gained members during the controversy.

“There are also churches that say, ‘We couldn’t leave even if we wanted to’,” added Hamilton. “So, we’re ultimately going to have several pathways forward.” Indeed, some churches may want to disaffiliate but can’t afford the prerequisite full payment of apportionments, remittances and clergy pension liability bills. Also required is a two-thirds vote of approval by the church conference and a majority vote by the Annual Conference.

However, members of the largely progressive Mountain Sky Conference (Colorado, Montana, Utah, Wyoming and a piece of Idaho) in the Western Jurisdiction revealed that they are exploring disaffiliation as a conference, which should make it easier for their member churches to leave the denomination together.

Many table groups at UMCNext were arranged to be diverse in race and ethnicity, age, gender, region, sexual orientation and ministry roles. Sixteen bishops, who came as observers, sat together also.

Participants discussed their diverse ministry concerns and contexts, their views on justice, the church’s mistreatment of LGBTQ members, race and racism, and their leanings toward choosing resistance, disaffiliation or dissolution.

They heard speakers share poignant testimonies that addressed hurtful discrimination and rejection of LGBTQ persons, along with fear and adversity. But also, they heard about loving relationships, resilience, redemption and confirmation of God’s call to ministry.

Expressions of hope and humility were widely shared. But conveners were challenged by some to address the prevailing sin of racism as a significant, if not primary, consideration in seeking justice for all and forging new denominational paths forward.

Only on the final morning did conference groups meet together, tasked to start their planning of what to do next. The Rev. Fred Day, who was invited there as head of the General Commission on Archives & History, joined fellow Eastern PA members at their table.

The UMCNext event was closed to the media, and recordings and photography were discouraged during the session because of concern that public exposure might inhibit candor. But some participants and outside critics did share scant photos and comments on social media.

Afterward, five of the 17 conveners read statements and answered questions at a press conference. They acknowledged that resistance could mean violating restrictions in the newly revised Book of Discipline and risking clergy suspension. But groups discussed other, less consequential forms of resistance, such as increasing LGBTQ visibility in lay ministry, partnering in worship with LGBTQ clergy of other denominations, and holding public vigils and protests.

“The term resistance is grounded in our baptismal vows,” said the Rev. Junius Dotson, a convener and head of the Discipleship Ministries general agency. “We promise to resist evil, injustice and oppression in whatever forms they present themselves. So, there are many forms of resistance, and people have to decide how they will participate.”

The deadline for resolutions to the 2020 General Conference is Sept. 15. When Church of the Resurrection hosts its annual Leadership Conference for pastors and laity Sept. 25-27, they will focus the agenda on what follows UMCNext. They expect to draw over 3,000 people in teams from about 1,000 churches, and that event will be open to the media.

Read UM News’ coverage of UMCNext (“Planning new directions for the church”), with information gleaned from the press conference and additional comments.

Also read UM News’ coverage (“Summit plans inclusive Methodist movement”) of the Our Movement Forward summit, held May 17-18, in Minnesota, just days before the UMCNext event. “The summit, which was open to any who wanted to attend, aimed to center on the liberation of the marginalized, namely people of color and queer and transgender individuals. The event also had similar options on the table, including both resistance and the formation of a whole new expression of Methodism.”