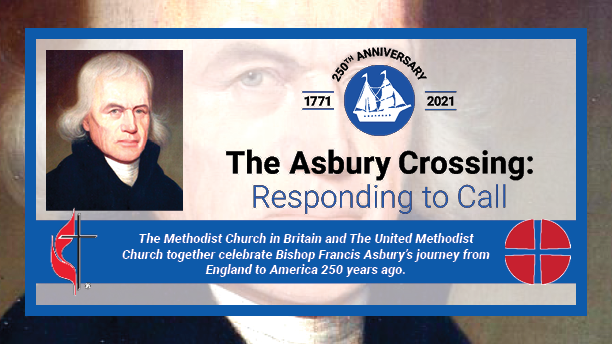 From Great Britain to Philadelphia: that was Francis Asbury’s itinerary 250 years ago when John Wesley sent him to America to formally establish Methodism on these shores. With that same itinerary, a sestercentennial celebration that began with events in England in mid-September will culminate this weekend, Oct. 30-31, at Historic St. George’s UMC in Philadelphia.

United Methodists, including Eastern PA Conference leaders, will remember American Methodism’s first bishop, Francis Asbury, who arrived here in October 1771 to organize the fledgling new church in the British colonies. The commemoration will feature a banquet, historical lecture and program on Saturday, Oct. 30, at 3:00 to 4:30 PM, and a special commemorative worship service on Sunday, Oct. 31, at 10 AM.

The Asbury Crossing: Responding to Call celebration will begin with a banquet and keynote address by John Wigger, noted historian and author of American Saint: Francis Asbury and the Methodists. An ensemble of the Philadelphia UM Mass Choir will perform music. And historical actor Peyton Dixon, who performs in St. George’s popular Time Traveler programs, will offer a dramatic portrayal of Francis Asbury. Nearly a hundred guests are expected to attend

Other invited guests may include leaders from the African Methodist Episcopal Church and other groups related to Methodism’s history. All are welcome to attend the celebration.

The UMC’s General Commission on Archives and History (GCAH) is partnering with the Eastern PA Conference and Historic St. George’s UMC to plan the affair, led by General Secretary Ashley Boggan Dreff and the agency’s two previous general secretaries, the Revs. Fred Day and Robert Williams.  Members of archives and history commissions and historical societies in Eastern PA and neighboring conferences, among other groups, are invited to participate.

“We look forward to gathering with everyone to celebrate the 250th anniversary of Francis Asbury’s arrival.” said Dr. Dreff. “May those of us gathered together at Historic St. George’s UMC and those within the United Methodist family be reminded of the spirit of early Methodism and the importance of connection in all of its forms.”

Members of the Methodist Church in Britain (MCB) celebrated the 250th anniversary of Asbury’s voyage to America, led by the British Church’s Heritage Commission.

Events marking Asbury’s launch and crossing from Pill, in Bristol, to America included a musical concert Sept. 11, featuring the band Magpie22, and worship Sept. 12 at the New Room in Bristol, UK. That service was led by the Rev. Jonathan Pye, Bristol District Chair, with Barbara Easton, Vice-President of the MCB Conference participating.

Also, media programs reflecting on the sestercentennial (250th anniversary) were released weekly over the period coinciding with Asbury’s voyage across the Atlantic Ocean (Sept.10 to Oct. 27).

The programs featured various aspects of Asbury’s legacy—his journaling as a spiritual practice, his response to the call to ministry, his experiences with itinerancy and rural ministry, and the legacy of the historic Christmas Conference where the American Methodist Church was established and Asbury was made its first bishop. Other podcasts explored John Wesley and Francis Asbury as influential Methodist leaders, and the involvement of Asbury and early Methodists in the denomination’s continuing conundrum with race and racism.

To Participate In Asbury Crossing Events:

October 30-31
Historic St. George’s UMC
Will be recorded and viewable online, after the event, at
http://gcah.org/resources/celebrating-asburys-voyage-to-the-americas-250-years-ago