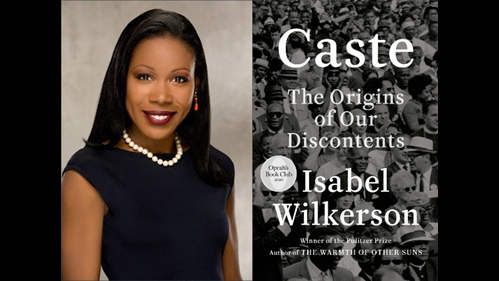 On the heels of Gil Rendle’s Quietly Courageous (Jan. 13 to Feb 3), the Congregational Development Team (CDT) Book Club will next launch into the Lenten season with a study of a new, highly touted, instant classic.  Caste: The Origins of Our Discontents (2020), by Isabel Wilkerson, examines the unspoken caste system of race that has shaped America and shows how our lives today are still defined by a hierarchy of human divisions.

For five weeks, Feb. 23 to March 23, on Tuesdays at 11 AM to noon, CDT Book Club members will read and discuss this  “masterful portrait of an unseen phenomenon in America,” described as “immersive, deeply researched narrative and stories about real people.” It was recently named by critics “an instant American classic and almost certainly the keynote nonfiction book of the American century thus far.”

Wilkerson took nearly a decade to write Caste, following her first book, also a recognized classic, The Warmth of Other Suns (2010), about the Great Migration of African Americans from the South. The author won a Pulitzer Prize as a New York Times reporter and fully invests her journalistic gifts of research, exposition and storytelling in her celebrated nonfiction works.

“The hierarchy of caste is not about feelings or morality,” she writes, examining heinous caste systems not only in America but in India and the former Nazi Germany, too. “It is about power—which groups have it and which do not.”

Finally, Wilkerson suggests how our society can “move beyond the artificial and destructive separations of human divisions, toward hope in our common humanity.”

The Conference’s Commission on Religion & Race (CORR) will co-sponsor the book study and help CDT purchase and give books free to the first 50 members to register. Book purchase scholarships are also available. Anyone can join by registering in advance.

The Revs. Alicia Julia-Stanley, who co-chairs CORR, Victor Gimenez and Tamie Scalise, a member of CORR and the Whites Confronting Racism group, will co-facilitate the dialogue sessions.

The CDT Book Club is primarily for church lay and clergy leaders who seek to revitalize their congregations, develop their ministries and deepen their discipleship.

More about Caste: The Origins of Our Discontents

The Pulitzer Prize–winning, bestselling author of The Warmth of Other Suns examines the unspoken caste system that has shaped America and shows how our lives today are still defined by a hierarchy of human divisions.

“As we go about our daily lives, caste is the wordless usher in a darkened theater, flashlight cast down in the aisles, guiding us to our assigned seats for a performance. The hierarchy of caste is not about feelings or morality. It is about power—which groups have it and which do not.”

In this brilliant book, Isabel Wilkerson gives us a masterful portrait of an unseen phenomenon in America as she explores, through an immersive, deeply researched narrative and stories about real people, how America today and throughout its history has been shaped by a hidden caste system, a rigid hierarchy of human rankings.

Beyond race, class, or other factors, there is a powerful caste system that influences people’s lives and behavior and the nation’s fate. Linking the caste systems of America, India, and Nazi Germany, Wilkerson explores eight pillars that underlie caste systems across civilizations, including divine will, bloodlines, stigma, and more. Using riveting stories about people—including Martin Luther King, Jr., baseball’s Satchel Paige, a single father and his toddler son, Wilkerson herself, and many others—she shows the ways that the insidious undertow of caste is experienced every day. She documents how the Nazis studied the racial systems in America to plan their out-cast of the Jews; she discusses why the cruel logic of caste requires that there be a bottom rung for those in the middle to measure themselves against; she writes about the surprising health costs of caste, in depression and life expectancy, and the effects of this hierarchy on our culture and politics. Finally, she points forward to ways America can move beyond the artificial and destructive separations of human divisions, toward hope in our common humanity.

Beautifully written, original, and revealing, Caste: The Origins of Our Discontents is an eye-opening story of people and history, and a reexamination of what lies under the surface of ordinary lives and of American life today.