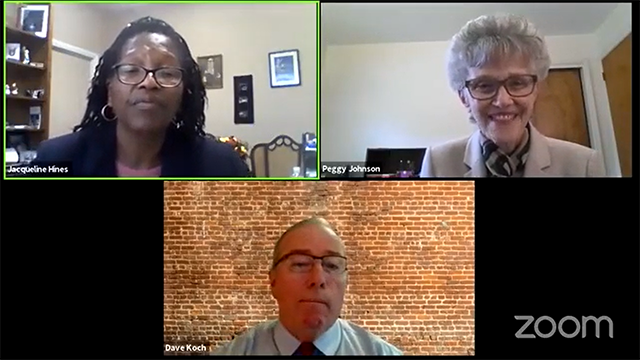 To ensure members’ safety during the COVID-19 pandemic, the 234th Eastern PA Annual Conference conducted its business session solely online Oct. 13, with an agreed-upon, reduced agenda that it processed in under four hours via a Zoom video-conferencing webinar.

The historic, perhaps shortest session on record, presided over by Bishop Peggy Johnson, featured worship and presentations of only essential resolutions and reports—all pre-recorded. The live portion included legislative questions and answers but no amendments or debate. Non-voting persons could view the livestreamed session on the Conference’s Facebook page.

Votes were cast using the secure, online eBallot system and a Zoom vote by telephone option. The reduced, online format was approved in a pre-conference online session August 26 that voted for temporary rules changes.

A resolution (#2020-09) to authorize Conference Trustees to sell up to 50 +/- acres of Innabah Camp & Retreat Center property to pay off Camp & Retreat Ministries (CRM) budget deficits passed by 522 to 74 votes, with 11 abstentions. The 2020 and anticipated 2021 deficits are partially the result of the pandemic that forced cancellation of summer camps and retreats this year and will probably also limit retreats in early 2021. A five-year accumulated payroll debt at Innabah—totalling nearly $400,000, with budget shortfalls in 2015, 2018 and 2019–also necessitated the land sale proposal.

CRM board president the Rev. Don Keller presented the proposal and answered questions. He reported that all four camps are stable despite the unavoidable deficits. He said also that CRM may sell the land for residential use but is also considering selling it to a conservancy land trust that would “guarantee non-development of the property for anything other than camp use for the foreseeable future.”

The land being considered contains no structures and its sale would not hinder camp programs. His  report included a video of Bishop Peggy Johnson’s appeal for special giving to support the camps in their time of need. (For more information read “Conference members hear of proposed sale of Innabah property.”)

The other controversial resolution (#2020-05) was to approve the disaffiliation of Grandview UMC in Lancaster, in accordance with temporary church disaffiliation rules adopted by the 2019 Special General Conference. Those rules—which are in effect until December 2023—allow for churches to disaffiliate and retain their church properties—which are held in trust and typically would revert back to the annual conference—if their decision is prompted by United Methodist Church disciplinary laws regarding the rights of “self-avowed, practicing” lesbian and gay members.

Those laws, upheld by the 2019 general church session, continue to deny such members the rights to be ordained clergy and to be married in UM churches or by UM clergy.

The Grandview congregation legally voted to seek disaffiliation for reasons of conscience in February 2020, as it awaited any hoped-for changes that might be made by the 2020 General Conference. However, General Conference was postponed, eventually until August 2021. Meanwhile, the denomination’s Judicial Council is expected to rule on the validity of the 2019 General Conference’s temporary disaffiliation rules vote because of problems with the vote.  But the global council has also been unable to meet because of the pandemic and restrictions on international travel.

Grandview has agreed to March 31, 2021, a Conference Trustees deadline, as its “date of disaffiliation,” once it has fulfilled all financial and organizational obligations. The church may choose to rescind its request before then or follow through with its departure. When asked if she intends to leave the denomination with her congregation, the Rev. Andrea Brown, who is a Conference delegate to the 2021 General Conference, said she is currently “discerning my course.”

The Grandview disaffiliation resolution was passed by a 466 to 115 vote, with 25 abstentions.

The Annual Conference also approved discontinuances of three closed churches: Avondale, Gradyville and Open Door in Kennett Square. Members also voted to shorten the name of the Conference Board of Pension and Health Benefits to simply the Board of Benefits and approved for 2021 an updated agreement for the Clergy Retirement Security Program (CRSP), Rental/Housing Allowances for Retired or Disabled Clergypersons, and recommended Equitable Compensation.

Also approved was the Council on Finance and Administration’s 2021 Budget and the Committee on Leadership’s 2020 Leadership Report for the new quadrennium.

Bishop Johnson called for “great rejoicing” in response to the announcement that the Conference has paid 100 percent so far of its pre-1982 clergy retiree pension liability, thanks to the former capital campaign and ongoing support. “Folks, that is a cause for great rejoicing,” she said, “and a thank you for God’s faithfulness and the faithfulness of our people. It shows this conference can do anything it puts its mind to.”

The Revs. Olivet Brown and Hun Ju Lee presented the Commission on Religion and Race’s 2019 Call to Action anti-racism initiative report. Conference Lay Leader David Koch presented his 2020 Ministry of the Laity report. And the Connectional Ministries’ report was presented in a colorful, thematic video, using the song “Bind Us Together,” that depicted staff tossing to one another a multicolored ball of yarn and conference ministry leaders bearing signs containing words from the Conference’s vision and mission statements.

Other video reports came from:

Connectional Ministries also presented its various annual awards for excellence in ministry, all recorded on video.

The Urban Commission presented four Herbert E. Palmer Urban Ministry Awards, one in each district, to:

And the One Matters Awards, presented on behalf of UM Discipleship Ministries went to the Revs. Navin Satyavrata and Manfredo Martinez Luna, pastors at the formerly merged Salem and La Familia UMCs in Allentown.

The Annual Conference’s Memorial Service for deceased clergy and clergy spouses and the Ordination and Commissioning Service for advancing clergy both happened on Oct. 14 at Olivet UMC in Coatesville. See the related story, coming soon.