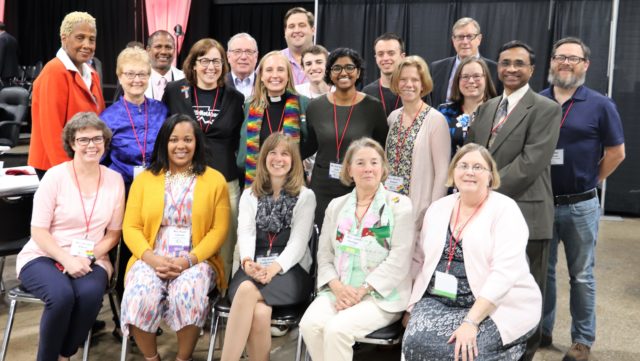 Meanwhile, the annual conference declared itself, by a narrow vote, “a One Church Plan Conference in spirit.” The declaration counters new church laws enforcing restrictions that forbid LGBT members from being married or serving in ordained ministry in United Methodist churches.

Those laws were passed by the Special General Conference in February 2019, where the conservative Traditional Plan narrowly defeated the centrist One Church Plan. The resolution, presented by the Rev. James McIntire, calls for ongoing efforts to embrace LGBTQ people and to support “ministry to, for and with all persons, regardless of sexual orientation or gender identity.”

“We are broken. We are in disagreement. We are hurting. We are afraid,” read McIntire, pastor of Royersford UMC, in beginning his presentation statement. “We are apologetic to the communities in which we minister. We need healing.”

McIntire cowrote the resolution with the Rev. Lydia Muñoz, his wife who was reelected to General Conference during the session. “We as an Annual Conference say, ‘Do no harm. Do good. And stay in love with God.’,” he concluded, quoting John Wesley.

The hotly debated resolution passed by just 66 votes, after one attempt to alter it with new wording and another to table it indefinitely both failed. When challenged for letting the resolution proceed to a vote despite its disagreement with church law, presiding Bishop Peggy Johnson called the measure “aspirational” and thus admissible, according to a recent UMC Judicial Council ruling. Nonetheless, conference members voted to appeal her decision to the Judicial Council.

The controversial resolution was one of 18 the body approved, while only one was voted down: an attempt to adopt and recommend to the denomination a modified, more Bible-centered advertising slogan. That resolution, #2019-10, which did receive some support, asked that “Open Bibles” be added to the popular but unofficial UMC slogan “Open Hearts, Open Minds, Open Doors.”

The GC2020 primary delegates elected are:

Taylor-Storm and Ehninger were each elected first. They were also elected first to the 2016 General Conference and co-led that delegation in 2016 and 2019.

Six more Eastern PA Conference members were elected as alternates for 2020. (See full list below.) The full delegation is half-clergy and half-laity, as required. Four of the eight GC2020 delegates also represented the conference at General Conferences in 2016 and 2019.

While only one of the eight primary General Conference delegates is male, the entire delegation is diverse in gender, generation—seven are under 40—and race and ethnicity—including Caucasian, African American, Latino and Indian-American members.

The elections took all three days and many ballots to complete, as nominees attracting fewer votes began withdrawing from the balloting to facilitate completion. Five of the 22 delegates were nominated on the floor of the conference or as write-in candidates.

Other resolutions that passed included:

Thanks to passage of Resolution 2019-02, organized clusters of neighboring churches working together in mission, known as “Mission ConneXions” since 2013, are now “EPA Mission Links.” The name change is in response to a copyright challenge by a national mission training and support agency based in Oregon.

The final vote taken, on Resolution #2019-17, came quickly, with limited debate, in the waning moments before a time-mandated adjournment at 5 PM on Saturday. Members affirmed asking the denomination to allow all local pastors and provisional clergy—including those who have not completed seminary or the course of study—as well as student pastors to be eligible for election as delegates to General and Jurisdictional conferences and allowed to vote on constitutional amendments.

The changes would be made to the UM Constitution and Discipline if first approved by the 2020 General Conference and then by an aggregate of two-thirds of annual conferences.

Delegates elected to GC2020 and to the NE Jurisdictional Conference 2020:

Look for more coverage of what happened at Annual Conference 2019 on our website later this week and next. And view many, great AC2019 photos in albums on our Flickr page.