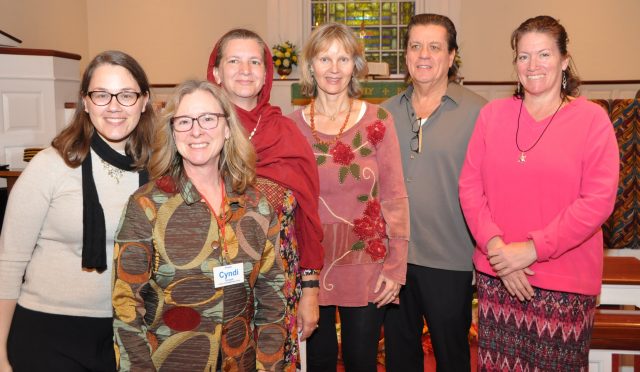 The Interfaith Community of Lower Bucks (ICLB) has been busy waging peace in the midst of conflict, most recently with their annual Thanksgiving Dinner and Service, hosted by Yardley UMC Sunday evening, Nov. 20.

The holiday event, like their other activities throughout the year, gathered neighbors of many faiths to learn and celebrate their diverse expressions of faith and common values, diverse in both religion and race. Following a time of fellowship and feasting on a multivarious multicultural menu of dishes, the assemblage moved to the church’s sanctuary, where six presenters briefly shared how their different faiths taught and celebrated thankfulness.

Skripak spoke on John Wesley’s principle of “practical divinity,” which emphasizes providing for people’s physical and spiritual needs, still a hallmark of United Methodism today. She said her faith tradition expresses “thanks to God through worship and service.” Barbara Bluejay Michalski, of the indigenous Lanape Nation of Pennsylvania, described ceremonies taught to children that express gratitude year-round to the Creator for the planting and harvest, the winds from the four directions and the celestial “Keepers of Creation”—the sun, stars, moon and earth. The one-hour service included an offering to support a local agency serving poor and homeless residents and the singing of hymns, the last of which, “Let There Be Peace on Earth,” signifies one of the interfaith fellowship’s main aspirations. It is an especially timely focus, considering recent incidents of hate and violence before and after the U.S. Presidential election, held Nov. 8. Such incidents have roiled division and discord, as well as fear and loathing, in many communities across the nation.

The Interfaith Community joined members of The Peace Center and various Lower Bucks County congregations, including Yardley UMC, for a “Day of Healing and Reconciliation” held the previous Sunday, Nov. 13, at a local Baptist church. The gathering of about 50 joined in dialogue after viewing a livestream Facebook broadcast of a celebration with prayers, music and speakers from the Unity Church in Washington, DC. The post-election event allowed people to share their hopes and concerns.  “Many people have felt marginalized at best and discriminated against and targeted at worst,” said Barbara Simmons, executive director of The Peace Center (TPC). Noor Phillips of the Zubaida Foundation (Muslim) in Lower Makefield. Phillips brought to the celebration a Syrian refugee family her foundation is hosting with the aid of local interfaith supporters.

Gayle Evans, a TPC educator who led the discussion, said the process of healing could take years, but is very necessary. She talked about recent acts of reported violence and hate crimes, including in a local school. “We saw a swastika painted on bathroom walls, derogatory comments made about gays and lesbians, and people of different colors,” she said. “We’ve seen a young lady who received a note for her to go back to Mexico which was tucked into her school bag… I saw a pick-up truck riding through the intersection with a huge Confederate flag flying.”

Members of the county interfaith group have events scheduled throughout 2017 that should help counter the influence of such divisive, derogatory actions. They will begin with communal prayer, song, dance and silence at their annual New Year’s Celebration for Peace on Jan. 1, 2017, at 2 PM, at the Yardley Friends Meeting House.

They’ll also assemble in January to dialogue about concerns while celebrating the Rev. Martin Luther King Jr.’s birthday. A Beloved Community Outreach event and other annual, themed events will follow throughout the year.

Also, be sure to read and share “Prayer for Unity,” written the day after the Presidential election by a UMC pastor and other Lower Bucks County clergy.