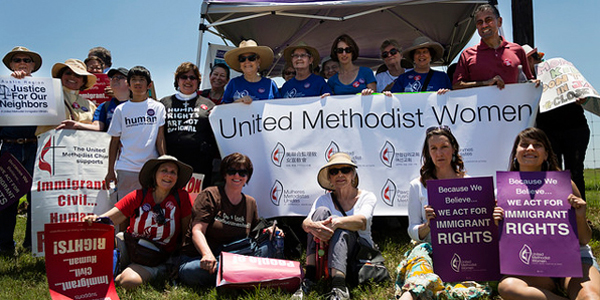 Several UMW units gathered in the sanctuary at Marshallton UMC Feb. 20 to hear presentations on immigration. We began our time by singing “In Christ There Is No East or West.”

Jackie Kennedy, a member of Marshallton’s UMW, shared her experiences from a mission trip to Croatia, the first stop for Syrian refugees arriving in the European Union. It offers a place for families to get vetted, fed, and cleaned up. After getting registered, they are shown their tents and beds.

Jackie said she kept thinking about the parable of the Good Samaritan, while the question “Who is my neighbor?” weighed heavily on her heart. She expressed, “Our neighbors don’t always look like us, speak like us, or share our culture, but they are in unsafe war-torn countries.

“There are mothers carrying loads on their heads and infants in their arms. There are refugees searching frantically for lost family members. Some of the children are excited about being in a new place, but the parents are overwhelmed and panicked.”

There was a moment when things started to get out of hand and someone thanked her. It was then she knew she was meant to be a gentle, loving presence in the midst of the chaos. Next, Janis Rosheuvel, the Executive Secretary for Racial Justice for United Methodist Women, spoke about immigration that hits closer to home: immigration into the United States. She posed many questions to the group, the primary one being, “What are you going to do?”

She took us through the history of the us, showing us how immigration increasingly became more politicized and criminalized. First she explained how migration is a natural human process, but due to fear of “the other,” immigrants are demonized, marginalized, and oppressed. This isn’t just in U.S. history; we can find evidence throughout the Bible, specifically in Exodus.

In the last 20 years the number of deportations and detentions has increased at an alarming rate. Currently, in the U.S. there are about 500,000 immigrants being held in detention, including whole families.

Race has always been tied to immigration policy and citizenship rights. The “whiteness” of people has been debated and redefined over the years. Rosheuvel explained the U.S. was a white supremacist country up until the 1950s and arguably is still today. Institutionalized racism is about who holds the power and controls the resources. It’s “intentional, legal, overt and self-perpetuating.”

In order to combat institutionalized racism, we need to redesign the institution. This is difficult but not impossible. Why is this so difficult? One reason is because power is finite. In order for one to gain power, another has to give up some.

The most difficult question of the morning was, “What are you willing to give up to share power?” That is a question we must all ask ourselves in our positions of privilege. What is at stake and what are we willing to give up? Let us all ponder this and remember, “In Christ there is no east or west, in him no south or north, but one great fellowship of love throughout the whole wide earth.”