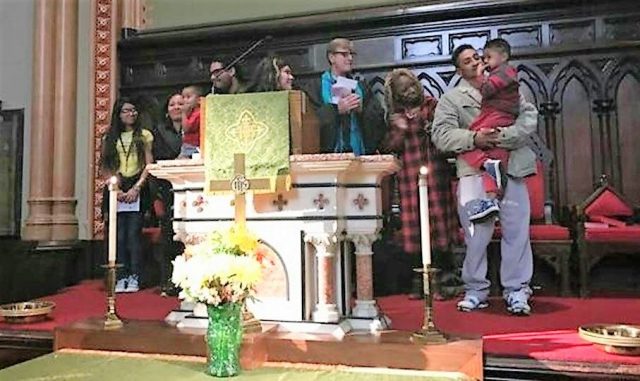 Arch Street UMC in Philadelphia is providing sanctuary for Javier Flores García, 40, an undocumented Mexican immigrant and a husband and father of three. The church, which is part of the national New Sanctuary Movement, welcomed him into asylum the day before he was to be deported and hosted a press conference last Sunday, Nov. 13, following morning worship.

García, who entered the U.S. after being violently attacked and robbed in Mexico, is eligible and awaiting approval of a “U-Visa,” which the federal government provides to victims who have suffered from certain crimes in their countries of origin. Reportedly, he returned to Mexico “on bad advice,” reentered the U.S. to be with his family, but was arrested in 2015 in front of his children.

Having just spent 16 months at an Immigration and Customs Enforcement (ICE) Detention Center and threatened with deportation if his special visa application is denied, he was released and told to prepare for deportation. That’s when he decided to seek asylum. “Arch Street opened its doors on Sunday,” said the Rev. Robin Hynicka, senior pastor, “to provide Sanctuary for a neighbor, husband and father who is undocumented but more accurately described as courageously dedicated to preserving the unity, health and safety of his family.”

Flores is described as a quiet, serious man who, before he was detained in 2015, worked at trimming and removing trees. He says one overriding concern drove him to reenter the country and seek asylum in the church, where he must now spend 24 hours a day in sanctuary: his desire to be with his family.

“I’m here to keep fighting for my children,” Flores told writer Sabrina Vourvoulias of Philadelphia magazine. “I am not a fugitive. I made this decision to come to this church, which opened its doors to me to continue fighting to be with my children.”

“His wife and three children are not at risk for deportation but they have experienced great harm and trauma due to Immigration Customs and Enforcement (ICE) actions,” Hynicka explained to Eastern PA Conference Communications.  “Young children suffer deeply, harbor devastating sorrow and experience life disrupting trauma when loved ones are ripped from them in immigration raids.”

JUNTOS, an immigrant human rights organization, staged the press conference, said the pastor, but “Philadelphia’s New Sanctuary Movement and Arch Street UMC are supporting them, and together we are standing for the moral, humane and spiritual convictions that families need to be persevered and ought not be separated by deportation.”

Arch Street’s action comes as U.S. President-elect Donald J. Trump is promising to follow through on campaign promises to deport millions of undocumented immigrants. His promise is inciting fear among many such immigrants and protests involving advocates for immigration policy reform, who call for hospitality, justice and mercy.

Philadelphia is one of reportedly more than 300 U.S. “sanctuary cities,” which refuse to cooperate with federal immigration officials by not holding undocumented immigrants in custody for nonviolent crimes. Mayor James Kenney said recently the “City of Brotherly Love” would remain a sanctuary city despite Trump’s threat to withhold federal funds from such cities. He announced a change in the term for his city, however.

“Immigrants are welcome in our communities and ought not to be scapegoated for any reason,” said Hynicka. “The trauma and harm caused by deportation, anti-immigrant rants and slurs, and unjust immigration laws and policies are evil, unjust and oppressive.” He cited United Methodist baptismal vows that require members “to accept the freedom and power of God to resist evil, injustice and oppression in whatever forms they present themselves.”