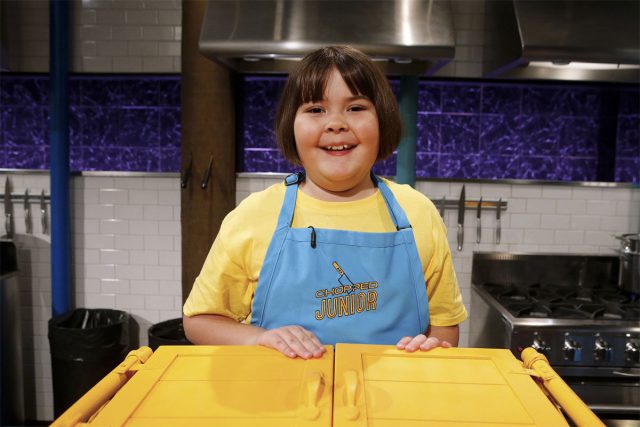 Now Lucy, whose parents are on the ministry staff of Christ UMC in Lansdale, Pa., is sharing part of her $10,000 prize with FISH, a Pennridge area program that provides food, clothing, school supplies and other needs to low-income families with children.

The four young contestants had to use rattlesnake, broccoli leaves and other supplied ingredients to create savory appetizers in just 30 minutes. Lucy’s expertly prepared Hollandaise sauce “was a success,” according to one impressed judge. Increasingly challenging entree and dessert courses followed, as two of the young chefs were eventually “chopped” from the friendly but suspenseful competition, and Lucy won in the end.

‘You have to have confidence in yourself.’

During the show she even encouraged an anxious fellow contestant by sharing the secret to her own success as a chef: “You have to have confidence in yourself. …(It’s) half the battle.”

Lucy’s father, Eric Chelton, is assistant pastor at Christ UMC. Her mother, Miki Chelton, is music director. She also has an older sister, Belle, 11. The congregation, judging from its Facebook page, was rooting for its star chef, who once told her mom she was going to sell 1,000 boxes of Girl Scout cookies and then exceeded that amount.

“I started cooking when I could get on a stool next to my dad,” Chelton told a reporter, explaining that she learned early how to handle cooking knives. Her signature dishes are Italian entrees with pasta, stuffed mushrooms and chicken.

In the interview portion, she tells the judges her dream is to open a restaurant someday. “But I don’t want it to be too popular,” she adds, explaining that she wants it to be “more like a house than a restaurant” so guests will feel at home.

The show was taped earlier in New York City, where Lucy got to visit Rockefeller Center and other sites with her family. But her donation to FISH (Fellowship in Serving Humanity) was made public during the broadcast.

“I think at her age it was really cool she decided to do that,” Eric Chelton wrote to Bishop Peggy Johnson. “You are going to be really proud of the way she acted on the show. I’m glad people got to see her in action.”

Bishop Johnson was indeed excited when she watched the program and witnessed Lucy’s victory. “Lucy is great on TV!” she responded to the young chef’s proud father.

“I had a blast. I would do it again,” said Lucy, who will enter fourth-grade this month at West Rockhill Elementary School. “It’s harder than it looks”

The hourlong broadcast (Season 3, Episode 2, Title: “Rattled”) will be repeated Sunday, August 14, at 5 PM on Food Network. And Lucy is scheduled to be on “Good Day Philadelphia” on Monday, August 8, at about 8:30 AM, where she will do a live cooking demonstration with the hosts.  You can watch an excerpt of the program online at www.foodnetwork.com/shows/chopped-junior/chopped-junior-videos.chid-85e9da06-fb08-4cde-9694-290d59efd825.vid-0256809.html