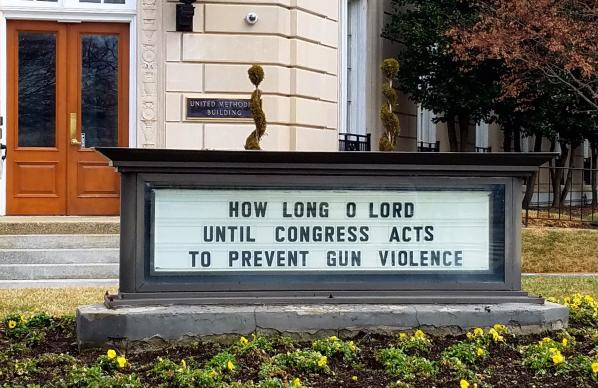 The Rev. Vance Rains had expected that his church’s Ash Wednesday evening service would be just like the noon service.But in-between, a mass shooting occurred at nearby Marjory Stoneman Douglas High School, in Parkland, Florida.

So evening worship at First United Methodist Church of Coral Springs, became a time for grieving, consoling and praying, with Rains improvising a new message.

“I talked about Jesus calming the storm and basically said that Jesus obviously doesn’t calm all the storms, but he’s with us in the storms, and he’s bigger than the storms,” Rains said.

Authorities have accused 19-year-old Nikolas Cruz, who had been expelled from the school, of using a semi-automatic AR-15 rifle in a Feb. 14 massacre that claimed 17 lives, including students and teachers. The high school is in Florida’s heavily suburban Broward County, but also close to the Everglades, which Marjory Stoneman Douglas helped preserve through her writings and advocacy.

Rains said one of the shooting victims had participated in youth programs at First Church Coral Springs, though she wasn’t a member.

No church members were killed or wounded.

“We had a lot of students and teachers there, lots of deep connections,” Rains said. “Our families were waiting to get notice that their child was fine. … People are still in shock.”

A youth member of Bethesda Haitian United Methodist Mission, in Tamarac was among the Douglas High student survivors.

“We heard the guns shooting. We were so scared,” said Judeland Norceide, a 12th grader.

The youth recalled a frantic, harrowing evacuation, and a tense two-hour wait to learn that a cousin of hers, a fellow Douglas student, was OK. Though no friends of hers were killed or wounded, she’s mourning the death of a beloved school staff member.

Judeland’s pastor, the Rev. Aurilus Desmornes, counseled and prayed with her at the family home after the shootings.

“She’s doing fine, but she was emotionally affected,” he said.

The Rev. Cheryl Jane “CJ” Walter, pastor of Cokesbury United Methodist Church in nearby Margate, said her congregation had a few family and friend connections at the school. None were killed or injured.

“Basically, it’s just listening to people at this point and helping them find something to hold onto, and we’re so grateful that God’s holding onto us,” Walter said.

The Rev. Cynthia Weems, superintendent of the Florida Conference’s South East District, noted the United Methodist pastors near the shootings are part of a highly effective covenant or support group.

“They are positioned particularly well to lead their congregations and communities in this time of tragedy due to their strong friendships with one another and the years of shared ministry they have modeled to their larger community, including church-school partnerships that are a priority for the Florida Conference,” Weems wrote in an email.

Bishop Kenneth Carter, who oversees the Florida Conference and also is the incoming president of the Council of Bishops, offered a statement, which read in part:

“In light of (the Feb. 15) shootings, we repent from our participation in a culture of death; we acknowledge the harm we do to others; and we claim the power of the cross that breaks the cycle of violence and retaliation. We also grieve with the communities of Parkland and Coral Springs,” he said.

Many United Methodists took to social media to express horror and outrage at the nation’s latest mass shooting, one of six to occur in schools in the last two years.

The United Methodist Church supports legislation to curb gun violence, and endorses a ban of large-capacity ammunition magazines and weapons.

The Rev. Susan Henry-Crowe, top executive of the denomination’s Board of Church and Society, said United Methodists should do more than pray about the Florida tragedy.

“We must heed the words of the prophet Isaiah to turn swords in plowshares and spears into pruning hooks. We must lift the words from our United Methodist Church and turn them into action by advocating with lawmakers,” she said.

The sign at the United Methodist Building, where Church and Society’s offices are, was changed after the shooting. The sign now reads: “How long O Lord until Congress acts to prevent gun violence.”

Meanwhile, at First Church, Coral Springs, Rains used his blog to muse on what “broke” the assailant and to acknowledge his own struggles in the massacre’s aftermath.

“I’m torn between wondering if the church is making any difference in this world at all, and knowing Christ, working in the church, is the only hope we have,” Rains wrote.

Sam Hodges, a writer for United Methodist News Service writer, lives in Dallas. Contact him at (615) 742-5470 or newsdesk@umcom.org