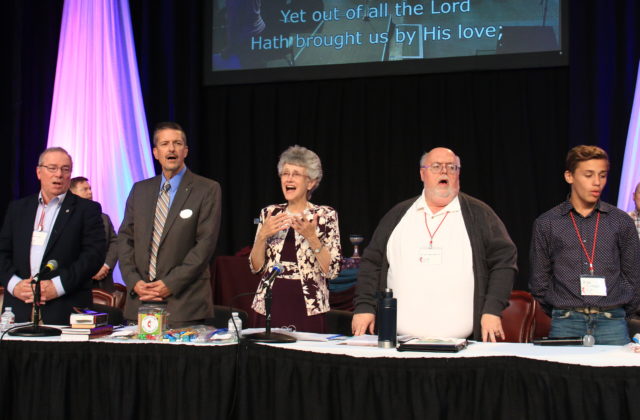 “What troubles have we seen,” begins the third, ominous verse of Charles Wesley’s venerable hymn, “And Are We Yet Alive,” which heralds the beginning of every Annual Conference.

What mighty conflicts past,
fightings without,
and fears within,
since we assembled last!

As over a thousand Eastern PA Annual Conferenc 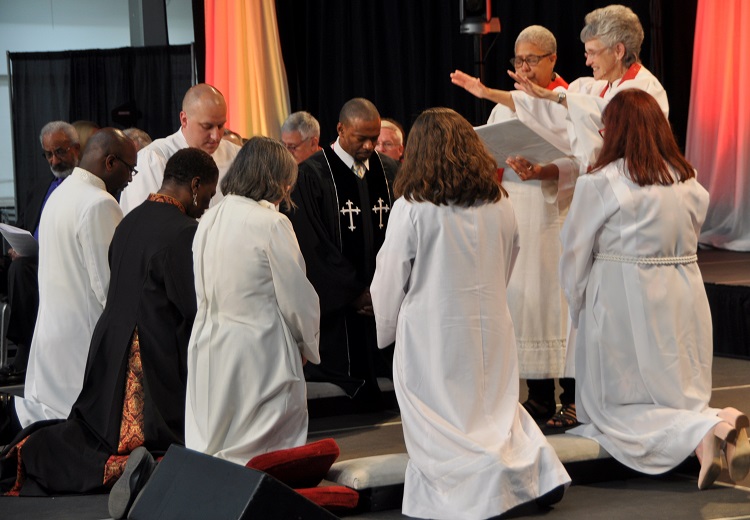 e members sang those lines to begin their 231st annual session, June 15-17, many knew that the conflicts and fears of their denomination were not all past, but some very present as an uncertain future awaits. Such knowledge made the conference’s imperative theme, “Rise Up and Pray!” all the more timely and essential.

The conference, which returned to the Philadelphia Expo Center in Oaks, Pa., offered many high points. They included deeply spiritual, creative and prayerful worship services with compelling sermons, uplifting performances by church musicians, enjoyable fellowship encounters, the ordination and commissioning of young clergy, recognition of clergy retirees and a thought-provoking presentation on prayer.

Bishop Peggy Johnson, in her opening sermon, urged members to immerse themselves in fervent, faithful prayer to combat “discouragement,” “distractions” and the “seductive temptation” of excessive “self-determination” that turns our focus away from obediently pursuing our disciple-making, world-changing mission for Jesus Christ.

Rise Up and Lead! 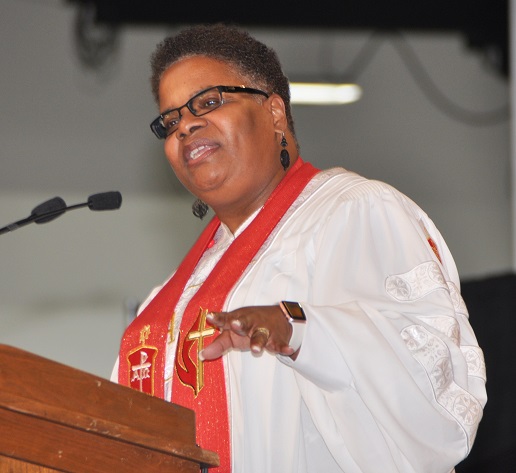 With the subtheme “Rise Up and Lead!” Bishop Latrelle Miller Easterling (right), of the Baltimore-Washington Conference, preached a similar admonition to clergy about to be commissioned and ordained. Six new elders were ordained; three deacons and four elders were commissioned. Two pastors, both Korean-American, were welcomed into full conference membership by transfer. (And four licensed local pastors were earlier approved for full-time service.) 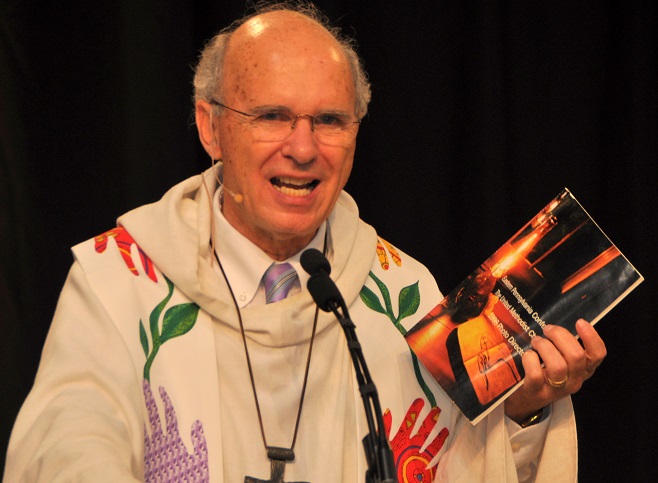 With the subtheme “Rise Up in Glory!” former Eastern PA Conference Bishop Peter Weaver (left), now retired, preached the memorial service to honor deceased clergy and clergy spouses and to comfort and encourage surviving families in attendance. This time the memorial service also honored the past lives of four recently closed and deconsecrated churches. 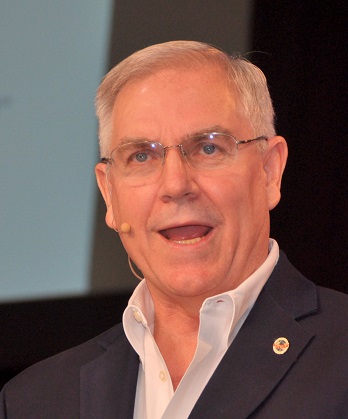 Nashville, taught a 90-minute session on prayer, offering insightful concepts, exercises and resources to deepen and expand one’s prayer life. “God takes the initiative in the relationship and communication we call prayer,” he emphasized. “Prayer begins in the heart of God, it comes to us, and we pray it back to God.”

Moreover, there were encouraging ministry and stewardship reports by the Cabinet and Trustees, the Council on Finance and Administration (CFA), Connectional Ministries, Camp and Retreat Ministries, and several lay ministry groups, including the Council on Youth Ministries. Not so encouraging were the trends of continued membership decline reported by Conference Statistician Gordon Yocum.

But there were also 27 resolutions signifying the assembly’s important legislative role. Five ratified the closure of four churches and the transfer of one to our neighboring Susquehanna Conference. Of the 22 other resolutions, nearly half related to controversial church laws and state laws used to restrict rights and access for homosexual persons.

Some resolutions would maintain or overturn current restrictions to ordained ministry and same-sex weddings for lesbian and gay members in United Methodist churches. Others asked the conference to advocate for or against potential laws that would allow individuals and business owners to refuse to serve LGBT customers for same-sex weddings and other activities that offend their religious consciences. 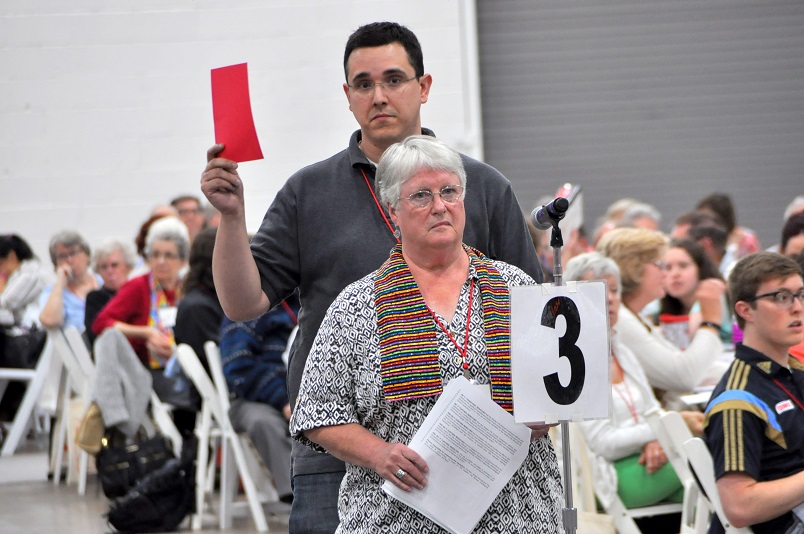 Religious liberty versus equal access, the right for tax-exempt churches to endorse political candidates, full inclusion versus exclusion of LGBT persons from ordained ministry and marriage, and church unity versus disunion—resolutions supporting or opposing these aspirations were ripe for lengthy debates on the conference floor. But most of the expected debates were abridged or avoided by withdrawals of some resolutions and the tabling or postponement of others.

The reasons? Perhaps the several spontaneous prayers that were requested and offered during tense debates. But also, no doubt, the hopeful expectations among many that the 2019 Special General Conference will decide whether to maintain or change the church’s official views and laws on homosexuality and ministry. That decision will come when it votes on the Council of Bishops’ recommendations based on findings of the council’s Special Commission on a Way Forward.

In the meantime, the Rev. Gil Rendell reported to the Annual Conference on the general purpose and progress of the Way Forward commission, which he serves as a consultant. And Bishop Johnson invited conference members to hold their own discussions and to sign up for the study commission she is organizing that is mandated to “discern a path by which the Eastern PA Conference can maintain unity, amid deep and abiding disagreements over sexuality and marriage.” 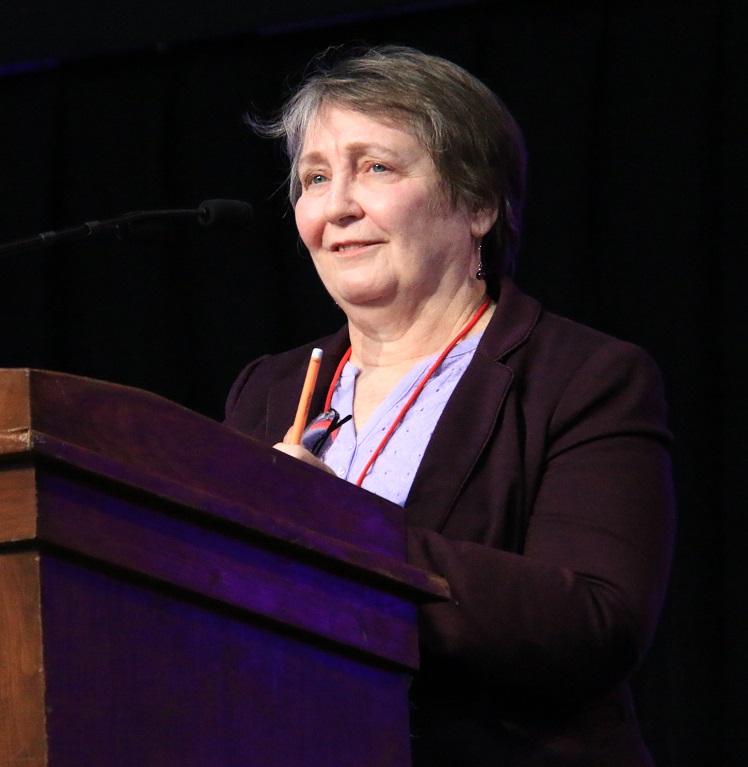 A handful of remaining issue-oriented resolutions also elicited little or no debate before approval. One called for “fair, humane immigration policies and practices.” Three others affirmed and urged continuation of efforts to foster racial understanding, justice and healing, along with viable ministries and leadership among racial-ethnic members, churches and communities.

In addition, members approved a new process for determining future conference endorsement of episcopal candidates; and they called for a Citizens Commission for Legislative and Congressional Redistricting to reform the state’s practice of gerrymandering that redraws voting districts for political advantage. 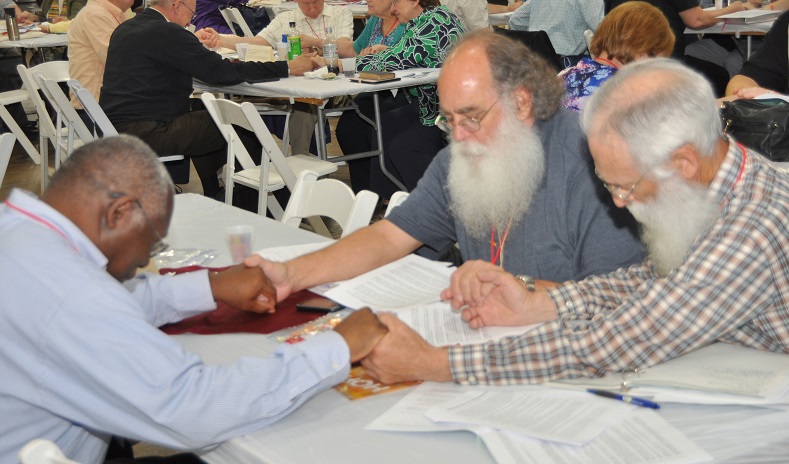 Approved by consent calendar were Equitable Compensation recommendations for 2018, rental and housing allowances for retired or disabled clergy, changes in the Clergy Retirement Security Program, and the funding of benefit obligations for next year. Meanwhile, CFA withdrew for further study a resolution to enact significant fiscal policy changes, including forgiving some past-due “historic balances” of churches in arrears.

Special offerings were received to support the conference’s scholarship fund, Board of Ordained Ministry scholarships for seminary students and Methodist Services (formerly the Methodist Home for Children).

NOTE: We will post more Annual Conference stories with additional details and more photos (including many on our Flickr and Instagram pages) during the week of June 25.  Also, visit our Annual Conference webpage to find a collection of conference reports and handout materials from Tom Albin’s Teaching Session on Prayer. Finally, visit that webpage again in early July to view prepared, comprehensive recordings of the Annual Conference.