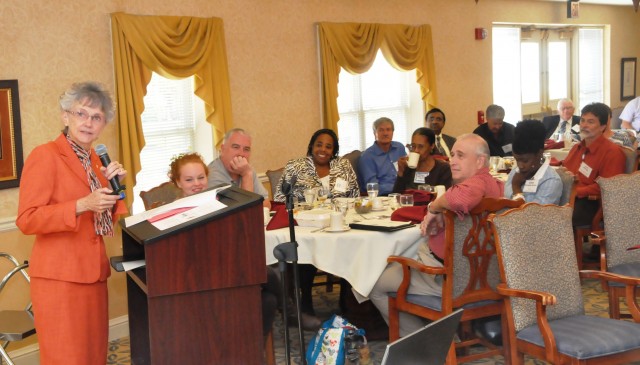 While some churches celebrated Pastors Appreciation Month in October, Bishop Peggy Johnson was celebrating “Districts Appreciation Month” during her annual, day and night visits to all six districts of the Eastern PA Conference. Meeting with clergy and laity separately, she shared news and views of the conference and denomination, especially for 2016; and she brought along some other guests to help her do so.

“Keep up the good work!” urged the bishop, citing positive trends in church participation and outreach, support for global missions, ministerial recruitment, leadership resourcing and the growing vitality of Mission Connections, the various clusters of churches in each district that collaborate in mission.

She highlighted issues coming to the 2016 General Conference, including proposed changes to make the Book of Discipline more global, general agencies more efficient and the global legislative session itself less Parliamentary and more spiritual and relational. She further explained why the Northeastern Jurisdiction, because of declining membership, may lose an episcopal area in 2016, and why it may not, as the final outcome remains uncertain.

What is certain, she reported, is our progress toward the denomination’s goal of raising $75 million for Imagine No Malaria and the progress made so far in efforts to eradicate the deadly disease. Each district received generous offerings to help the conference push this historic global-health fundraising campaign to the finish line.

Bishop Johnson also dug into a tough topic that is on the minds of many across the conference and the nation: racism and racial reconciliation. She cited the recent essay “Enough is Enough” by Erin Hawkins, head of the General Commission on Religion and Race, and endorsed suggested tactics to foster racial courage, accountable relationships, inclusive respect for all people, and active solidarity with those who demand an end to racial violence, oppression and dehumanization. In each district session, a member of the conference Committee on Native American Ministry (CONAM) followed the bishop with an impassioned pictorial presentation on why the 2016 Annual Conference will celebrate ceremonial Acts of Repentance with Native Americans. The celebration on June 16 will seek to repent for the church’s involvement and complicity in the nation’s long, sordid history of racist oppression against indigenous peoples.

The 2012 General Conference asked each annual conference to sponsor a repentance ceremony during this quadrennium that ends in 2016. CONAM has been helping the conference prepare for that celebration for several years by offering classes and presentations at various events. As always, the fellowship, worship and hospitality at these district gatherings produced enthusiasm and some good turnouts. Buffeted by rain from Hurricane Patricia, the Southwest District nonetheless drew more than 130 people to St. Mark’s UMC in Mount Joy and allowed clergy and laity to dine together by scheduling their separate sessions close together. The district also totaled nearly $859 in its Imagine No Malaria offering.

The Central, East and Northwest districts received $1,001, $109 and $779, respectively, from their Imagine No Malaria offerings. They met at First Phoenixville and Conshohocken UMCs (Central); Bensalem UMC (East); and First UMC in Palmyra and Kochenderfer’s UMC in Lebanon. (Northwest). The Northeast District, meeting at Asbury UMC in Allentown and Covenant UMC in Bath, raised $308 to fight malaria from roughly 110 clergy and lay attendees. The district’s talented, all-clergy Free Spirit Praise Band, with Bishop Johnson playing flute, was as usual, a highlight of worship. Nearly 140 attendees at both Southeast District sessions gave almost $1,200 to Imagine No Malaria. The clergy celebrated Holy Communion during their meeting at Simpson Meadows in Downingtown, accompanied by the Rev. Jim Wilkin on guitar. But at Lima UMC the laity got a double portion of worship music from the Sayres Memorial UMC Choir and the Hopewell UMC youth band, #JesusTrending. Beyond raising about $4,234 total for Imagine No Malaria, the dozen district gatherings featured uplifting music, worship, hospitality and fellowship. And they all received valuable information from the Bishop’s report to prepare them for General, Annual and Jurisdictional conferences in 2016. Her PowerPoint presentation, which includes the CONAM Acts of Repentance slides, can be found on the conference Website under the Resources tab, titled Bishop’s Report to District Meetings 2015 (PPT download).