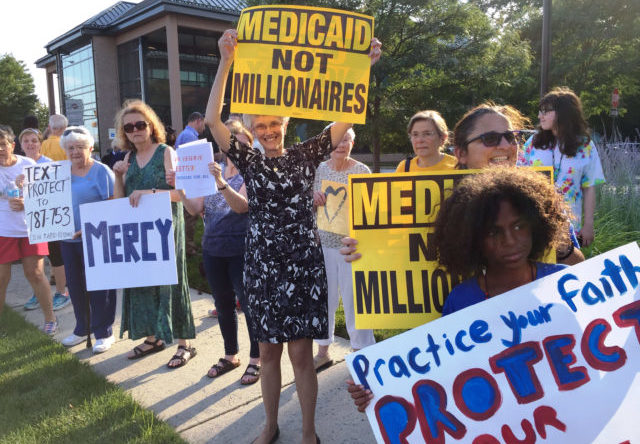 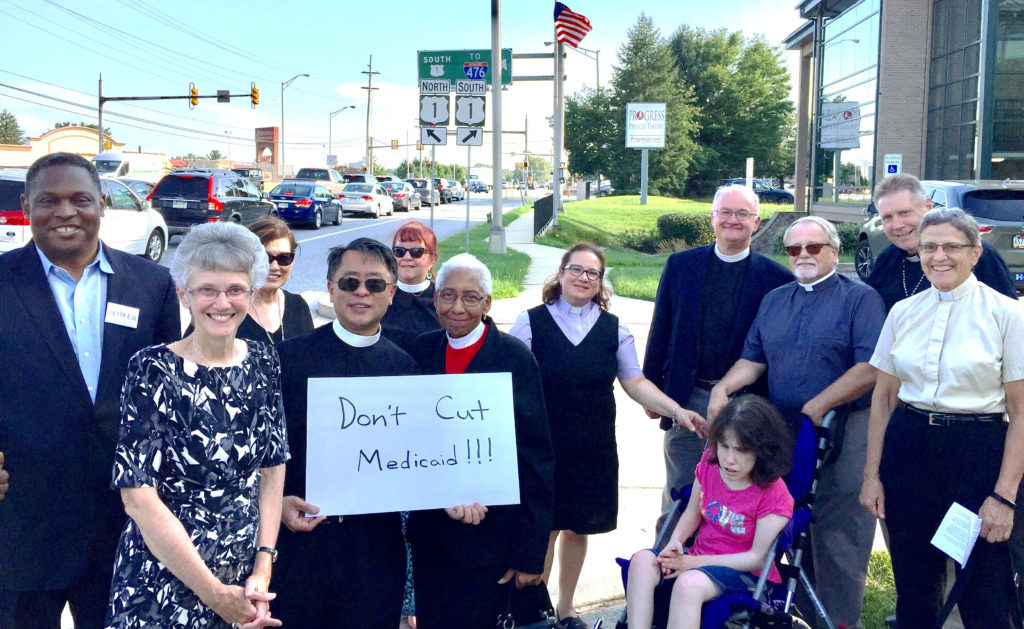 The faith-based grassroots social action group POWER (Philadelphians Organized to Witness, Empower and Rebuild) organized the interfaith rally, which drew about 60 protesters. They included about a dozen supportive Eastern PA Conference pastors, most wearing clergy collars, among other religious leaders.

Congressman Meehan, who voted against the American Health Care Act of 2017 (AHCA) that passed in the Republican-led House of Representatives in June, was not present at the rally. “It is really a publicity action to draw attention to this concern,” said Bishop Johnson in a notice e-mailed to conference members on Monday. “Concerned church and community members are welcome to join us.”

U.S. Senate Majority Leader Mitch McConnell of Kentucky recently gave up after failing to secure enough votes in his party to pass a Senate healthcare bill similar to the House bill.

Most Democrats and numerous Republicans in both houses have opposed both bills, complaining that they called for policy changes and spending cuts that were either too severe or, for some, not severe enough to repeal and replace the current Affordable Care Act (ACA) instituted during former President Barack Obama’s administration.

McConnell says he may try to push through a Senate vote to fully repeal the ACA, also known as Obamacare, without proposing any immediate policies to alter or replace the law, which would leave millions of Americans without health insurance at all. 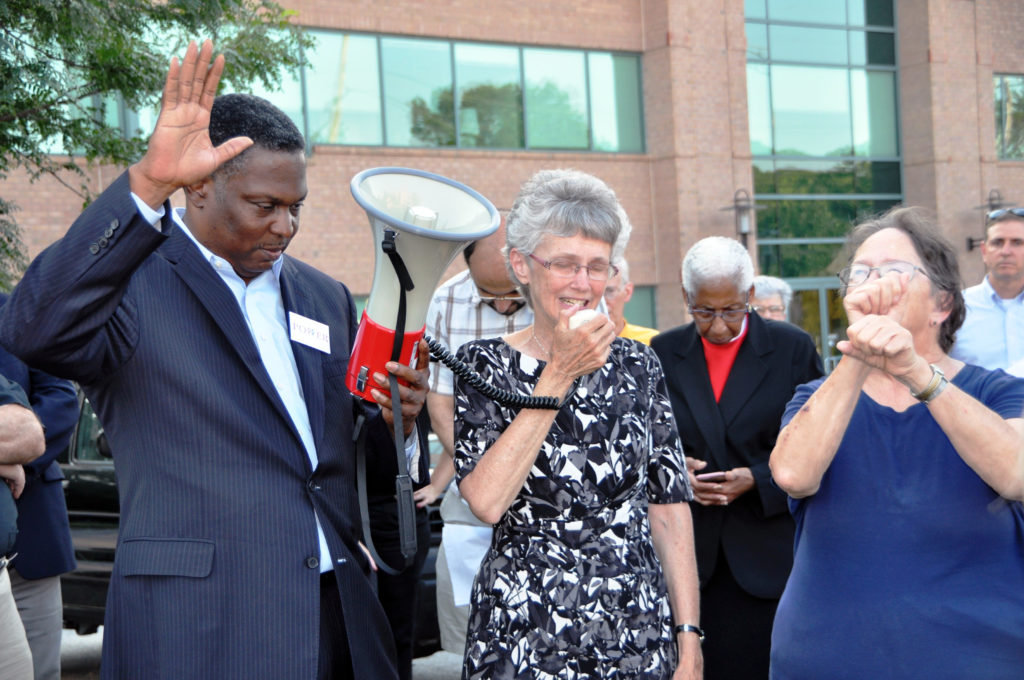 Tuesday’s protest focused on proposed spending reductions and other changes to Medicaid, which both Senate and House bills have proposed.

“We will continue to remind Congressman Meehan that we don’t want Medicaid to be changed with the proposals for the new healthcare plan,” said the Rev. Gregory Holston, POWER’s Executive Director and the pastor of Janes Memorial UMC in Philadelphia. Other United Methodists have also held protests and sought meetings at Senator Pat Toomey’s offices in Harrisburg and other locations.

The Senate GOP healthcare bill proposed slashing federal spending on Medicaid by $772 billion from 2017 to 2026. The House bill would cut Medicaid spending by $834 billion over the same period, according to the non-partisan Congressional Budget Office. These cuts are alarming to many lawmakers, doctors, hospitals, patients, healthcare advocates and religious leaders.

The proposed Medicaid changes would affect mostly poor children, people with mental-health issues, and disabled people, but also mature, low-income citizens who do not qualify for Medicare benefits for the elderly. Nearly 5 million special needs children depend on Medicaid and the Children’s Health Insurance Program. 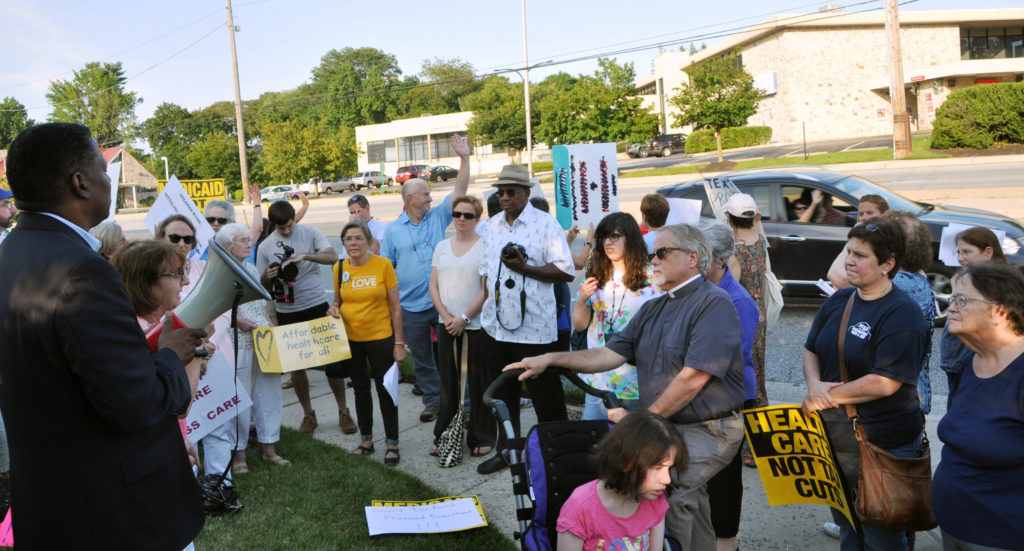 Clergy and lay speakers at the rally—including Protestant, Catholic, Jewish and Muslim leaders—shared their views, recited relevant scriptures and told the small, attentive crowd about family members and friends who benefited from the ACA, especially its expanded Medicaid coverage, to heal critical illnesses and pre-existing health conditions. Meanwhile, listeners, stood on the grass and sidewalk in front of the building that houses Meehan’s office, some holding up signs, as passing motorists honked their car horns to show support.

Bishop Fisher, who came from Delaware to participate, began the hour-long rally with a rousing prayer, and Bishop Johnson later ended it in prayer.

“We came to speak on behalf of continuing Medicaid coverage for the most vulnerable citizens of our nation,” Johnson said later, citing the many persons who spoke about how Medicaid had saved their lives and the lives of their children. “We asked God to help us find ways to continue to care for them, after the example of Jesus Christ who spent his ministry doing the same. This is in keeping with our United Methodist beliefs and practices.”

Referring to Republican efforts in Congress to reduce funding and eligibility for Medicaid and other programs, Johnson said Rep. Meehan “voted not to support the cuts in the House bill, and he was commended for that at the rally.” 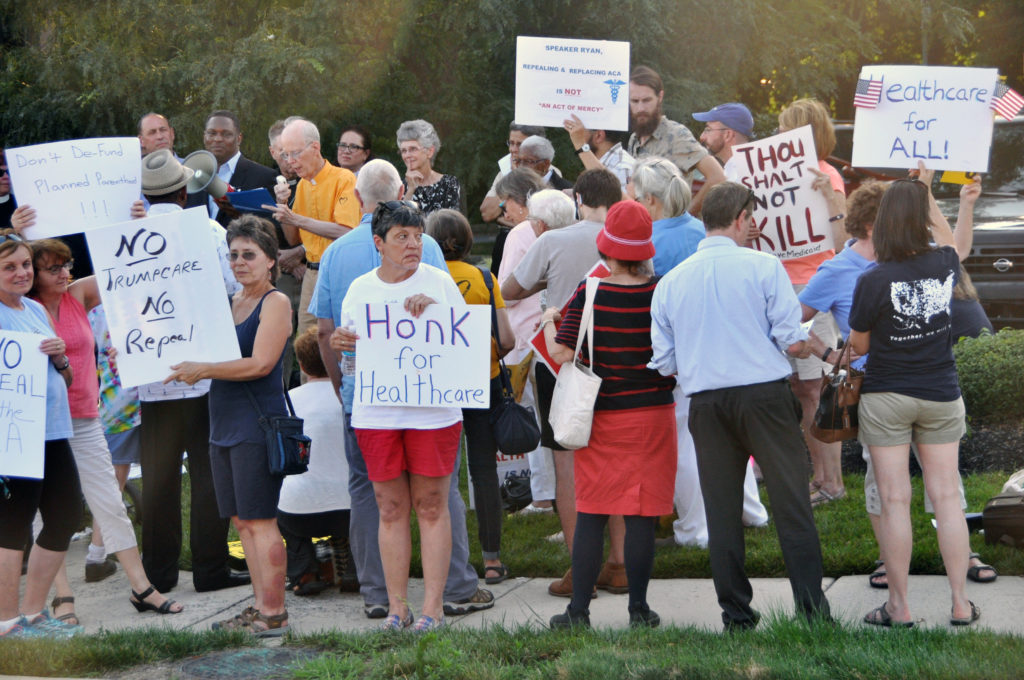 “No one spoke against the President or had political partisan conversations,” she added. “This peaceful gathering was organized by POWER, an interfaith citizen group that speaks on behalf of the poor and marginalized people of our state, and we support them in that advocacy.”

Health is a condition of physical, mental, social and spiritual wellbeing.  John 10:10b says, “I came so that they could have life, indeed, so that they could live life to the fullest.”  Stewardship of health is the responsibility of each person to whom health has been entrusted.  Creating the personal, environmental, and social conditions in which health can thrive is a joint responsibility – public and private.  We encourage individuals to pursue a healthy lifestyle and affirm the importance of preventive healthcare and health education, environmental and occupational safety, good nutrition and secure housing in achieving health.  Health care is a basic human right.

Providing the care needed to maintain health, prevent disease and restore health after injury or illness is a responsibility each person owes others and government owes to all, a responsibility government ignores at its peril.  In Ezekiel 34:4a, God points out the failures of the leadership of Israel to care for the weak. “You don’t strengthen the weak, heal the sick, bind up the injured, bring back the strays, or seek out the lost.”  As a result, all suffer.  Like police and fire protection, healthcare is best funded through the government’s ability to tax each person equitably and directly fund the provider entities.

Countries facing a public health crisis such as HIV/AIDS must have access to generic medicines and to patented medicines. We affirm the right of men and women to have access to comprehensive reproductive health/family planning information and services that will serve as a means to prevent unplanned pregnancies, reduce abortions, and prevent the spread of HIV/AIDS.  The right to healthcare includes care for person with brain diseases, neurological conditions or physical disabilities, who must be afforded the same access to health care as all other persons in our communities.  It is unjust to construct or perpetuate barriers to physical or mental wholeness or full participation in community.

We believe it is a governmental responsibility to provide all citizen with health care.  We encourage hospitals, physicians and medical clinics to provide access to primary healthcare to all people, regardless of their healthcare coverage or ability to pay for treatment.

For more coverage of the protest rally, see the story “Group continues to press its support for Obamacare” published July 18 in the Delco Times News.