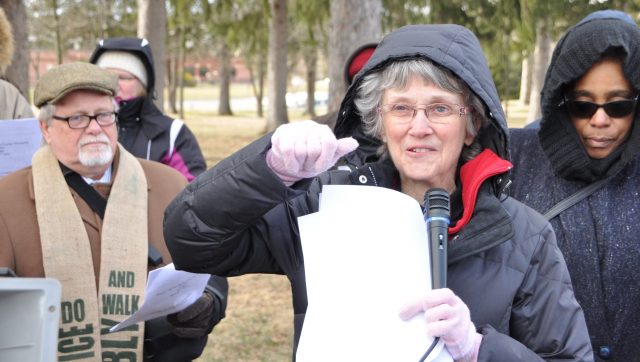 Bishop Peggy Johnson shared a message of hope and solidarity for Latina immigrant detainees at the Berks County Residential Center Sunday, March 12, surrounded by about 90 people who gathered to worship and witness for justice and mercy. The hour-long, interfaith prayer vigil, which included songs, scriptures, litanies, prayers and the bishop’s message, occurred outside the detention center, across from the county prison, in Bern Township. “This is a very sad thing for women and children to be detained here for many months,” she said, reading her statement in both Spanish and English. “It is hard on the mothers and the children. We know and are sorry that our laws have not been followed as they are written. But God is on the side of those who suffer. We will pray for justice and mercy, and not only pray, but also talk to those in our government who are making these laws.”

Members of several Eastern PA Conference churches were present, including members of United Methodist Women and the Rapid Response Team on Immigration, among other advocates, as police officers watched from their cars nearby. Although mostly silent except for the sounds of worship, the advocates held signs protesting the lengthy, isolated detention and inadequate conditions at the facility, which reportedly cause some children emotional stress and despair. The Rev. Lydia Muñoz, pastor of Church of the Open Door UMC in Kennett Square, led most of the proceedings in English and Spanish, as some of the detainees, known as the Berks Madres, watched and responded from behind a distant fence, even joining in the singing and prayers.

Bishop Johnson said there are well-meaning people on both sides, but it is time for the center to close and allow its temporary residents to live elsewhere. They are awaiting hearings on their requests for asylum in the U.S., as refugees from violence and poverty in their mostly Central American countries. The federal Immigration and Customs Enforcement agency (ICE) operates the Berks County-owned facility, which houses about 75 immigrant women and children, and pays $1 million a year for its use. It is one of three such detention centers in the U.S. The other two are in Texas.

Activists have held numerous vigils outside the center to stand in solidarity with the women and children while exposing their captivity to the outside public and media. Organizers plan to hold vigils there monthly. The Rev. Dai Morgan, Coordinator of UM Advocacy in Pennsylvania, invited Bishop Johnson to participate on behalf of the event’s co-sponsor, the Pennsylvania Council of Churches.