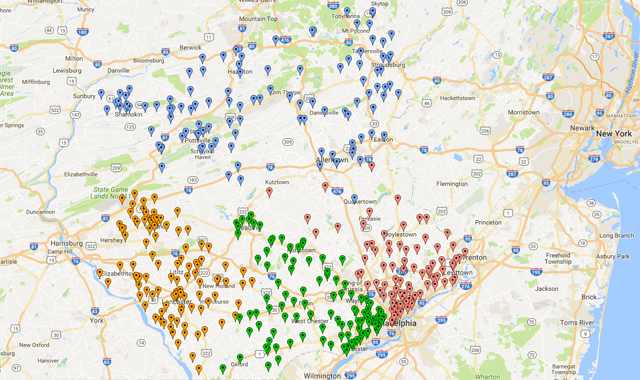 The Eastern PA Conference Cabinet has completed arrangements of its 415 member churches into four new districts—East, North, South and West—to take effect July 1, 2017. The reduction from six to four districts was a necessary cost-savings decision made by the Annual Conference at its adjourned session Oct. 1.

While the East District, which retains its current name, will now have 92 churches, the other three, newly named districts will each have more than a hundred.

The number of churches in each district, and their sequence ranges on the attached chart, are: To ensure full inclusiveness, the Cabinet intends for each district to see itself as wholly new and not merely expanded and renamed with the addition of new churches. District meetings, decisions, leadership roles and program initiatives will be aimed to reflect that “all things new” understanding.

“We are launching into a new way of living that will challenge us to resource churches more locally through the ministries of our mission connections,” said Bishop Peggy Johnson. She credited the helpful feedback she received to her presentations of the redistricting plan during district town hall meetings last April. “It is my hope that the leadership of the mission connections can fill in the gaps so that District Superintendents are freed up to perform their role as Missional Strategists.

“Finances are clearly driving most of this decision,” said the bishop. “But with every challenge there is an opportunity to learn new ways of doing ministry and keeping the goal of making disciples of Christ for the transformation of the world always before us.”

The Cabinet studied carefully the geographical, cultural and theological realities of churches across the conference, said Johnson. “Great care was given to be sure not to put all African American churches in one district and to have a mix of multicultural churches in each district,” she explained. Various aspects of the new district transitions are being planned and worked out now. That includes: the work of District Resource Assistants; reconfiguration of district committees on Ordained Ministry; nominations for district leadership positions; UMW and UMM leadership positions, etc.

A consultant from the Susquehanna Conference is helping the Cabinet with some adjustment plans since that conference also down-sized a few years ago. The last part of the transition will happen in 2018, said the bishop, “when we move the Northeast District office and parsonage to a more central location in the new North District.”