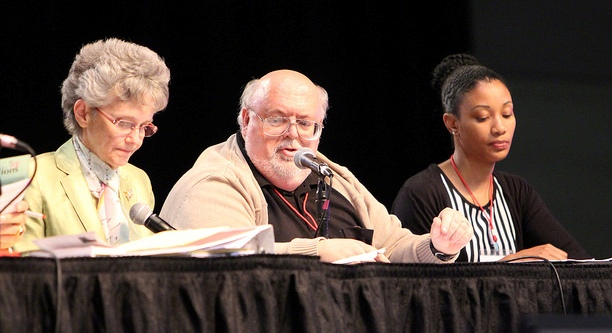 The 2016 Eastern PA Annual Conference, meeting June 16-18, cautiously postponed action on some key resolutions during debates, at times choosing compromise over controversy. But while some of the 21 submitted resolutions were approved, none were rejected outright, and several may be modified and presented again in future sessions.

The nearly 900 members, meeting at the Lancaster County Convention Center, turned back a proposed new process for endorsing episcopal nominees, as well as revisions in the conference’s Safe Sanctuaries policies, and calls for changes in church law to allow for “full inclusion of LGBTQ persons in the UMC.” They also asked for a special commission to examine whether the conference should denounce claims of “religious freedom” by states that would permit the refusal of employment, services or accommodations for LGBTQ persons on religious grounds. No nominees endorsed for bishop

The Eastern PA Conference’s delegation to the 2016 General and Jurisdictional conferences proposed new rules for choosing nominees to endorse for election as bishops. In a resolution presented by the Rev. Joseph DiPaolo, they proposed that the annual conference vote on the delegation’s recommendations, with a two-thirds margin needed for approval. If the vote margin fell short of two-thirds, the body could then nominate consenting, eligible candidates for endorsement, provided the conference secretary received a petition for each nominee signed by 10 lay or clergy members and the conference received at least 500 copies of the nominee’s biography and personal statement.

After receiving and vetting two willing nominees early this year, the delegation recommended no endorsement for the Northeastern Jurisdictional Conference’s impending election of two bishops in July. Several annual conference members objected to that decision and to the delegation’s proposed rules. After conferring with a small group of members and hearing their criticisms, the delegation recommended–and the conference agreed–to refer their resolution to a committee for refinement and bring it back to the full body in 2017.

The conference did proceed to vote on three consenting clergy members nominated from the floor: the Rev. Jeff Raffauf, the Rev. Irving Cotto and the Rev. Tracy Bass. But in the end, none received the required two-thirds margin of votes needed for endorsement, although Raffauf fell just short of that mark. Jurisdictional Conference delegates are not bound by any conference endorsements when they vote for bishops. Conference members had more questions and suggestions regarding proposed new Safe Sanctuaries policies than the Rev. James Wilkin could address in the session’s waning hours on Saturday. So the resolution was referred back to his Safe Sanctuaries Committee to be refined, with input from others who have suggestions and concerns, and then resubmitted at the conference’s Adjourned Session Oct. 1.

The updated policies for Reducing the Risk of Abuse in the Church require all churches and camps and retreat centers to comply with the state’s Child Protective Services Law and additional conference procedures. The revised standards relate to screening, selecting, training and supervising church staff and volunteers and also to reporting and responding to allegations of abuse. However, some conference members offered suggestions, including adding church-sponsored schools and pre-schools to the list. Wilkin invites anyone with suggestions or questions for the committee to contact him before August at pastorjimwilkin@gmail.com.

The proposed new “Computers, Networks and Internet Access Policy,” for ensuring secure, responsible usage of churches’ electronic resources, will also be re-submitted  to the Adjourned Session in October. That resolution recommends imposing rules, responsibilities, restrictions and protections on the use of computer equipment, e-mail, the Web and private information of church members. Also put on hold was consideration of two resolutions calling for changes in the church’s Book Discipline to allow for “full inclusion of LGBTQ persons (lesbian, gay, bisexual, transgender, queer or questioning) in the UMC.”

One resolution asks the conference to support “the right of lesbian and gay persons to marry each other in civil and religious ceremonies” and to support the decision of clergy and congregations to “perform or hold ceremonies.” The other calls upon the conference and its districts to support and interview all candidates who seek to be considered for ordination as clergy, “regardless of their sexual orientation or gender identity.”

The denomination currently denies both rights to lesbian and gay persons due to contested language in the Discipline that describes homosexuality as “incompatible with Christian teaching.” The 2016 General Conference avoided debating proposed changes to that language and the resulting prohibitions. Instead it accepted the Council of Bishops’ proposal to establish a study commission to examine the Discipline and diverse viewpoints on the validity of its language and laws. The bishops will recommend considered changes, or no changes, to the next General Conference, either in 2020 or sooner in a called session.

After some debate, a majority of annual conference members agreed to postpone further consideration of the two resolutions calling for access to marriage and ordained ministry for gay and lesbian persons until the next General Conference decides to change or maintain church law, based on the bishops’ recommendation. However, while not ready to welcome LGBTQ persons into ordained ministry or matrimony, the conference did approve a Resolution on Radical Welcome that encourages churches to reach out especially to LGBTQ young people, many of whom suffer high rates of family rejection, homelessness and suicide. Debate on the resolution prompted somber references to the massacre of dozens of young people, many of them LGBTQ, just days before in Orlando, Fla.

Earlier Bishop Peggy Johnson had named and prayed for the 49 Orlando victims slain by a terrorist gunman at a nightclub popular among LGBTQ patrons as a safe space. (She also announced that Friday, June 17, was the first anniversary of the mass killings of nine members and the pastor of Emanuel A.M.E. Church in Charleston, S.C.)

The Radical Welcome resolution, as amended, calls on churches to “practice radical welcome to LGBTQ persons in specific and tangible ways.” One way suggested in the original but not final resolution was to hold special events on Sunday, Oct. 9, 2016, “the Sunday closest to National Coming Out Day” (Oct. 11). During the debate several members expressed caution about free-spirited, bawdy LGBTQ parades that occur in some places on National Coming Out Day. But others reminded the body that “Jesus ate with sinners” and urged members to be wherever young people gather to invite them into a saving relationship with Jesus Christ.

The conference also quickly approved a resolution calling for aggressive support of the Pennsylvania Fairness Act. The popular but still languishing legislative bill (House Bill 1510 and Senate Bill 974) would amend the state’s Human Relations Act “to ensure freedom from discrimination in employment, housing and public accommodation based on sexual orientation, gender identity or expression.”

Yet, members debated and deferred a related resolution calling on the conference to “denounce” any legislative bills anywhere that use the term “religious freedom” to justify discrimination against LGBTQ persons in employment, housing and public accommodation. The body approved a motion asking the Bishop to form a special commission, including LGBTQ members, to examine the issue and report back to the conference by Nov. 2, 2017. The conference also approved a new Policy on Sexual Misconduct Involving Adults, offered by the conference’s I-Care Team, which replaces one in use since 1998. It defines and interprets prohibited behaviors, including romantic relationships between ministerial staff and parishioners. And it sets expectations for reporting and investigating charges, including a non-retaliation policy to protect legitimate accusers.

The updated policy, which commits the conference to providing educational materials and training for prevention, covers all clergy, lay employees and volunteers in all churches and conference agencies, institutions or organizations. Like the UMC’s Book of Resolutions 2012, it interprets “sexual abuse (in ministry)” as any “sexual contact or sexualized behavior” between a leader in a ministerial role and any “congregant, client, employee, student, staff member, coworker or volunteer.” Before approval, however, the policy’s prohibitions were amended to exempt persons who engage in “consensual sex within the bounds of marriage.”

Two advocacy resolutions related to undocumented immigrants also passed easily. One urges the conference to support the state assembly’s House Bill 1459,  that would grant such immigrants legal driver’s licenses. The denial of licenses to an estimated 200,000 undocumented persons hurts the state’s economy, public safety and quality of life for those immigrants, advocates say.

Another approved resolution supports the Public Citizens for Children and Youth’s Dream Care Campaign to provide health insurance for all children, including more than 24,000 undocumented, currently uninsured children. And a final resolution called for studying “alternative, fair voting methods for electing members to committees and delegations” and recommended “ranked choice voting (also known as ‘preferential voting’)” to be used for choosing among multiple nominees or electing delegations. It was withdrawn to be resubmitted at the Adjourned Session, Oct. 1.

All approved resolutions, as amended, will be posted on the conference website, accessible from the Annual Conference webpage, once they are received from the Conference Secretary in their final form.